I went camping with Geoff this weekend.

We were with the Boy Scout Troop and were supposed to participate in an annual Saco River cleanup around Fryeburg Maine, but the water was so high there were no banks to clean up. The water was up in the woods. So with no banks with trash on them, and high dangerous water, there was no point to clean up anything. They canceled the canoeing portion of the trip. Our troop leaders made the decision to still go on the trip, because we would be camping for free (that's part of the exchange for doing the cleanup).

Geoff was incredibly disappointed, he didn't want to go if there wasn't going to be canoeing, but I was slated as one of the drivers, they needed me to go. I told him it would still be fun, it'd be great.. He doubted it...  we fought about it. I told him he had to go because I wasn't going to go by myself on HIS camping trip. Reluctantly he agreed.

We've stayed at this campground before, but this time, because everyone was canceled for the canoeing NO one was there. Except for us. We had the whole place to ourselves. It was fantastic.

We got up there at 9pm, pitched tents, built a fire, and had some fun. The morning came and we went hiking instead of the planned canoe trip.

Our assistant scoutmaster told us it was an "easy" hike. About a mile and a half. Easy. I've been walking a lot, I've lost about 20 pounds. I was feeling really good about myself... until I got to the first incline.

Oh holy shit. I'm not in better shape. I'm still a big fat giant bucket of lard. The boys were halfway up the hill, the "MOUNTAIN!" and I was struggling to get along.

Eventually I made it. And not THAT much further behind the group. I could see them the whole time. A year ago I think I might have died, but ... I made it. It was hard. So hard. But I did it. 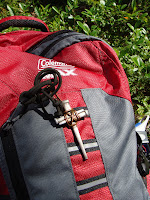 The funny thing was I had brought this cross with me. My neighbor Thane had made it in shop class, and left it in my car. When I realized it was there, it made me smile.

I tied it to my backpack and said "I'll take Thane with me." He wasn't on our trip, he would have been but he had a workday at the summer camp where he'll be employed this year.  In walking up the hill, the knot slipped and the cross ended up dangling down the full length on the rope. Luckily it didn't fall off the pack, but ...

It kept swinging, and poking me.

Which made me start laughing on so many levels. It was like God was prodding me on. Poking me. Or Thane was... I was giggling at the concept, and it kept me going. I told Thane when I got home and he thought it was funny too.

There was an old mine at the top of the mountain and the boys had fun sampling rocks and working with two of the scoutmasters on a lot of geology... and throwing rocks at each other. We ate our lunch at a beautiful overlook.

The hike down took less than a half hour. It's fun moving downhill.

One of the scoutmasters has a family summer home nearby on a lake, so we went over there after the hike for swimming and kayaking. I sat in the shade with my sore feet elevated and watched the kids play on the float they assembled for the family and pulled the 50 yards out into the lake. They played King of the Float for over an hour. It was a great time.

And for the boy who didn't WANT to go on the trip because there wouldn't be canoeing... he didn't get into a canoe once and still had a very very good time.

That night, we had a big bonfire and played a game called "mafia" which was a screaming, rousing success. Geoff got to play "storyteller" for most of the stages of the game. He was incredibly funny. Each time, he stood up, put his hands behind his back and opened the tale of how the victim was slain and why. And each one he made up on the spot, and they were incredibly funny. 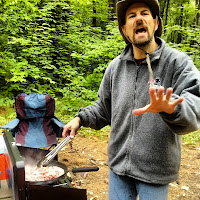 All told, it was a great weekend trip. I spent a lot of time with Sheryl and with my friend Jay, new to the troop but not new to me. His son is one of the new Scouts in the troop as of March and it was so fun to hang out with him this weekend. He cracks me up. Here he is pontificating and preaching in the pulpit of Bacon. We had 4 skillets going at once, each one cooking a pound of bacon. Yes we did. And it was good.

I still feel like my legs are going to fall off, but I took a 1.6 mile walk at lunch today and it felt good after about a mile.

Maybe I am getting stronger.

Pictured below, me and my son. Jay almost got him to smile. And I just look like someone beat me up, but ... I did it. 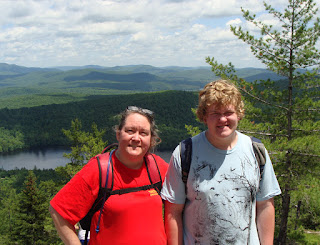 So part of my trying to prevent myself from having Diabetes is to go for walks and get more exercise. I used to have excellent blood sugars, never over 120 after a meal, with fasting always between 60 and 70. Now, my fasting blood sugar has yet to get below 130, since I've been testing it as part of this diet. The good news is when I started testing it, my fasting blood sugar was about 150. So knocking it down 20 points is good, but not good enough.

Anyway, where I work there is a beautiful campus, with walking trails and many options for which direction I would like to go. I try to get in at least a mile. I walk a 19 minute mile for the most part. Sometimes faster, sometimes slower.

The weather in the last week has been horribly wet and damp, so I only got out one day, Thursday, and on my way back to the building the sky opened up and then it started to hail.

My walks for the most part are solo endeavors, but I try and connect with our tech writer Jan and go sometimes. She's lovely. I think she comes here early in the morning, runs 4 or 5 miles, and then takes a walk at lunch. Kind of crazy if you ask me but ... she is great and I like her company. And we tend to walk a little faster when we're together.

Before I leave here, we are hoping to do the big loop, leave the property, walk out to the back road, come out to 1A, come back around the front and up the driveway. I am not sure how far it is, it will probably take us an hour is my guess.

In the meantime, this is an example of one of the walks I try and get in. Today with Jan was almost 2 miles.

View route
soc.li
MapMyWALK is a community that provides all the tools you need for an active lifestyle. From routes and workouts to nutrition and training plans, MapMyWALK is dedicated to your success. Get active. Get MapMyWALK today!
Posted by Christine G. at 1:29 PM 2 comments:

And She Is Twenty

Ten days after my first anniversary I gave birth to my first child, my only daughter. She was unplanned, unexpected, and her creation made us change our plans for our immediate future. We were living in Decatur, Georgia. Doug was a grad student in a program that wasn't meeting any of his expectations, and I was unable to find work because every interview I went on went something like this:

Hiring Manager: You're not from around here, are you?
Me: I live in Decatur.
HM: But... you're not from around here... I can tell. Where are you from?
Me: (sometimes wise-assishly): DE-CAY-TER. Perhaps you done herd ovit?
or
Me: (honestly): We recently moved here from Boston. My husband is a student at Emory. I'm looking for a job so we can stay here in Atlanta.

I never got the job, whether or not I was flip with DE-CAY-TER or the honest truth.

We moved back up here to Massachusetts and stayed with friends who just had a little girl themselves. She was born on my wedding day. She prevented her parents (her mom being my best friend) from attending my wedding.

Jess was born right before a Simpsons episode on a Thursday night. I remember telling the doctor to hurry up and finish with her because the Simpsons were coming on, and he looked at me funny. But ... it was true. I wanted to introduce her to The Simpsons.

And now there are 2 friends here at my house, friends of hers since middle school, bearing cheesecake and laughter.

It is a very good day. 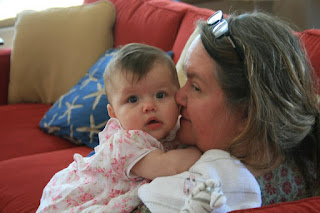 In other news, my friends had their baby baptized this weekend. I was asked to take pictures for them at the baptism and at the party. And when things were especially crazy and she needed a bottle, I took her. And had some super awesome cuddle time with her. And her mom took this picture of me. I am the baby whisperer sometimes. This particular baby digs me.

to steal from The Who, the title comes from "Tommy."

Doug and I celebrated our anniversary on June 1st, with a gorgeous dinner at a restaurant in Haverhill, and then drinks after with my boss (and friend) and co-worker (and friend) who I think will always be my friends even after I don't work with them. My husband was charming and adorable. We laughed a lot. I mean, a lot. And it wasn't just the espresso martinis talking.

I've been married for 21 years. And half of those years are blogged here. Which is just plain weird. I love Doug beyond all reason and rationale. He is my Samwise Gamgee. He carries me through the horrors and I am as his Frodo forever thankful.

I do not know what I would do without him.

So, happy 21. Our marriage is legal, to drink "drunkening fluids" as Geoff once called them.