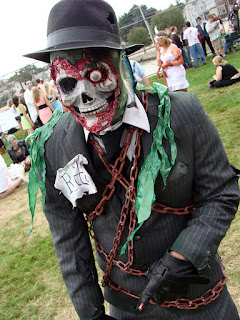 It was a great day.

A very great day. I went down with Jess and her friends Eric and Sarah, and we met up briefly with my friend Joe and his friends. I had a fantastic time taking pictures of people and the costumes were outstanding.

I love how every year there are different balances. The first year I was impressed with the amount of Zombie Resistance Fighters, Umbrella Corp guys, survivors.... not quite survivors. One year there seemed to be a lot of religious victims, nuns and priests and whatnot. That kind of grossed me out a bit. But hey, if everyone can be attacked and turned into zombies, why not the clergy?

There should have been some political/politician zombies. I think Mitt and Barack were unrepresented and that was disappointing. There were a lot of zombie inconsistencies. For instance, the Ghostbusters were there, and they looked great but they're Ghostbusters, not Zombiebusters. There was a zombie girl in a bikini with board shorts on, and she was dragging her surfboard by her ankle behind her and it was bitten as if a shark had attacked her... didn't know you could get turned into a zombie by getting attacked by a shark. Are there shark zombies? Hmmm. But -- they looked fantastic. 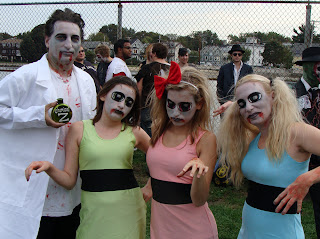 There was a team of Powerpuff Girls, with the Professor, and he had "Chemical Z" instead of Chemical X. Absolutely perfect.

There were a lot of gay guys there who were HYSTERICAL making all kinds of jokes and innuendo. There were families with their little kids there, and the kids were freaking adorable. One decided he didn't want to be a zombie, he wanted to be a fighter, so he took his gun and walked up to people and yelled "Hey Zombie! Eat THIS!" and made pew pew pew noises.

One year my daughter and her friend went as protestors. I wish there were more of them then, and there were none there this year, sadly...

This being year five, and the fifth year I didn't dress up (year one I put some zombie blood on my face and ate my friend Henry's head a little bit to try and turn him into a zombie, but he was no fun) I was glad to be there and also glad to not singled out for not playing along.

Next year, I may dress as a resistance fighter. Get a bunch of people with me and hit the army navy store for some fun stuff that we can make into survival gear.

All my pictures are here, but I do want to take a second and congratulate my friend Joe for winning best costume. He went above and beyond with the "Ratto" swims with the fishes zombie. Damn, he was good. Loved him.

There were two downers for me. One, it rained. We got to East India Mall, about a mile into the walk, and it just started pouring. I lost everyone, lost Joe, lost the kids (caught up with them at Harrison's Comic Book Store). The walk just kind of fell apart for me and we ended up at the Howling Wolf, which was overrun by zombies and tourists but we sat on the patio and enjoyed dinner.

The other bummer was a Evangelical witness lady at the gathering.

Now, y'all know I go to church, I am an elder in my church, I love God. I love Jesus. I believe fully in the Holy Spirit. I am a Trinitarian to the core. Now. that said, I also love make believe, I love silliness, I love cosplay and dress up and creativity. I don't see evil Satanic powers in Zombies. I don't think Zombies are from the Devil. If Zombies happen, heck, it's because of science, medicine, corporate corruption, illness, physical world stuff.

People who want to be dressed up as zombies want to have a little bit of fun, for a couple of minutes. So why do you need to come and witness/evangelize to people right then, right at the Zombie Walk gathering....

You gotta go pee in their cheerios, don'tcha? 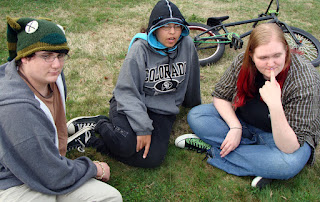 I had been out and about in the group taking pictures and came back to Jess, Eric and Sarah who had this woman sitting with them. I'm used to weird people approaching me all the time, and figured that my daughter and her friends have the same magical draw to people. I got a little closer and could hear her going on and on about the Light of Christ and it is so beautiful and pure that even a little child can accept it etc etc etc. The kids didn't want to listen to her, they politely "uh huh, yeah, I guessed" at her. She said "you're not dressed up, you don't seem that into this scene?" and they Hmmm'ed quietly back at her.  I stood there for a bit and wanted to say something but I kept my mouth shut and let her walk onto the next group. I didn't want to get into it with her, because, like I said, this wasn't the time or place in my mind to try and "reach" people.

The next kids that she approached were were NOT as quietly dismissive as my kids. They were downright rude and disgusting. But I can't say as I blame them, and I can't really fault her too badly because she had to have known exactly what kind of push back she was going to get into.

But she probably went back to her people and said that the place was full of evil and "spiritual warfare" when what it was was a mess of goofy people who didn't want to hear her message right there and then. They were there to hang out and have fun. Just ... for crying out loud, let people do that once in a while, wouldya?

It bummed me out. Truly and deeply. I just don't know what else to say about it.

Anyway. I got to see Joe, I got to eat dinner at one of my favorite places. Eric's friend Jeremy and his girlfriend caught up with us there and we had a great time. My friend Carol came down after seeing my post on facebook saying I was there. All told, the rain didn't ruin the day. It made it different. I still had a great time, and got a lot of great pictures, and am looking forward to next year.
Posted by Christine G. at 7:12 PM