And then there was one...

I am distracted and unable to focus on anything at all, so we'll see how I do getting through this.

Thursday morning we had to put Jack dog to sleep. Just shy of his 13th birthday. It has been a rough couple of months for Jack, and I know this was the best thing to do for him but that knowledge makes this experience no easier.

I don't want to write about the process, it is what it is and it is part of loving a dog, especially one who gets old. He was old, he was sick, and he was in distress, and we let him go.

In some ways this is an incredible relief and in other ways I am simply unable to handle my heartache.

This winter we started out with very little snow, and one day standing out there with him doing his doggie thing I thought it was such a shame that we didn't have any snow for him to enjoy, this his last winter for sure. And I asked myself "well, how do you know it is his last winter for sure?" Then I told myself to shut up because yes, it was, and I couldn't pretend to trick myself into being pleasantly surprised if he made it to summer or fall or next winter.

We knew it was coming, we knew it would be here soon, and every day was a gift.

Jack eventually got his snow.

I had a routine with Jack  at night. He would tell me he needed to go out, so I'd get off the couch (I was sleeping in the living room with him because he had to go out a couple of times a night) let him out the front door and watch him walk to the foot of the walkway where he'd pee. Then, he would either flop down right there and start eating snow or he'd turn around and face the house, walk a couple feet and flop down and start eating snow.

I'd go pee. I'd put wood on the fire. I'd get my snow pants and boots on. I'd go out and join him because once he was done he needed help getting up the 2 steps into the front door. We don't have a fenced in yard here at the apartment like we did at the old house, so he needed to be monitored. He couldn't move fast or far, but the one thing I didn't want him to do was move out to the end of the driveway and into the street, in the darkness, black dog that he is.... 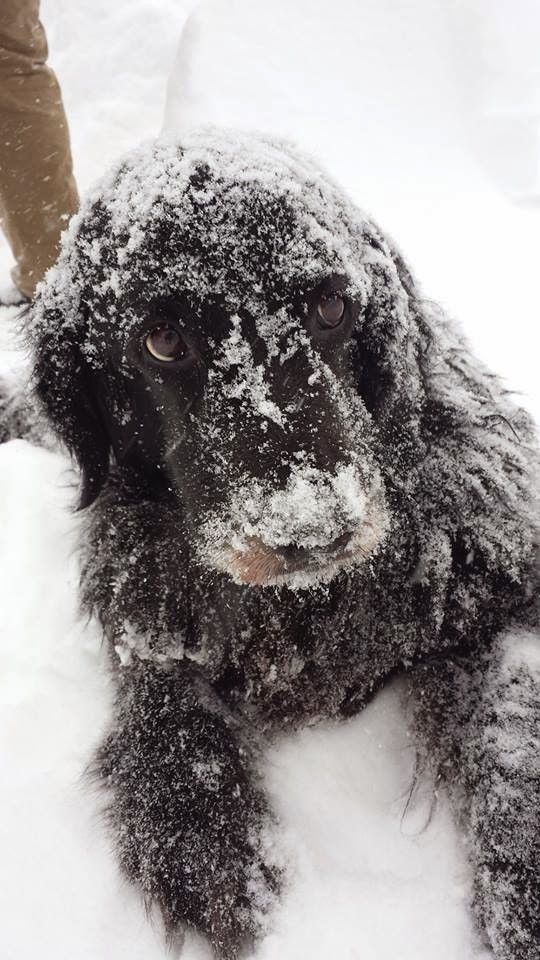 So I would join him outside and keep an eye on him. Even on nights when the wind chill was about 30 below, I would just stand there and wait for him to be done. He loved to eat snow, roll in the snow, shove his face in the snow...

We stood out there at night in the darkness with the stars in the freezing cold and listen to the coyotes chattering down the power lines that run just to the east of our house.

And then he would flop down on his belly and eat snow.

There were days I'd quickly reach my threshold for standing out there and I'd encourage him back into the house. And there were days he'd eat a little snow, and head back in fast.

What I wouldn't give for another chance to stand out there in the dark with the moon and cold and my boy.

On Tuesday night Jack was fine... sort of. We were able to get him into a standing position to walk out the door but he would make it just to the top step and lay down and pee without standing. And Doug had to lift him up to bring him back in the house.  We joked around that it was like having a drunk friend who weighed 70 pounds. Don't worry man, I'll get you home okay.

Wednesday he stopped walking altogether. Both children texted me at work to let me know that he was unable to stand up and walk, and didn't want to be lifted up and helped out the door. Our vet's office was closed so I spoke with the on call and made an appointment for the next morning.

Our vet said that he was paralyzed from the hips down from arthritis or a clot or something. We could do testing but as she put it "there's no coming back from this, he's not going to walk again, not like last time" and she knew from our last visit that we knew that we'd be making the decision on the next visit if she said there was nothing that could be done that wasn't "heroic and expensive."

So we opted to not bring him home and to let him go.

And even though I'd prepared myself for this, it still sucks. Maybe because I worked so hard to prepare myself for this, it sucks extra hard. I knew after Gonzo passed away this summer that Jack would not be far behind, so I've had months to think on this. None of this was sudden, or an accident. It has been months in the making but that does not make it better.

When I posted on Facebook that we'd put him to sleep I asked people not to "Rainbow Bridge" at me.  I fully believe in Heaven and that God loves us enough to give us these gifts of companion animals on this plane so I don't doubt for one second that they're waiting for us when we get there.

When something gives you this much actual, real, honest joy, how can it not be part of your eternal paradise?

So one of my animal rescue obsessed friends asked me what I had against the Rainbow Bridge story she thinks it is beautiful. First of all, I'm allowed to not like something. It's hokey. It's poorly written and trite.  I don't like it. It is Hallmark Card made for TV Movie quality. I understand the sentiment that our pets are waiting for us. But I don't see this "rainbow" or "bridge" that we cross over together.  The story provides me no comfort or solace, no soul salve and no respite. It makes me roll my eyes and barf a little.

That said, I have my own vision. And it isn't the same for many of you. It may be, if you're like this. But hey. If you're not, that's okay. You can create your own vision of reunion and I will not question you and your heart.

There is just a field, with really kickass mountains in the distance. Maybe it is like New Zealand, or maybe it is somewhere up the county in Maine where we ran back in the day. There are black-eyed susans growing, and bees. The grass in the field is brown, and moves gently in the wind. The air is cool and crisp. You are going to need a jacket. 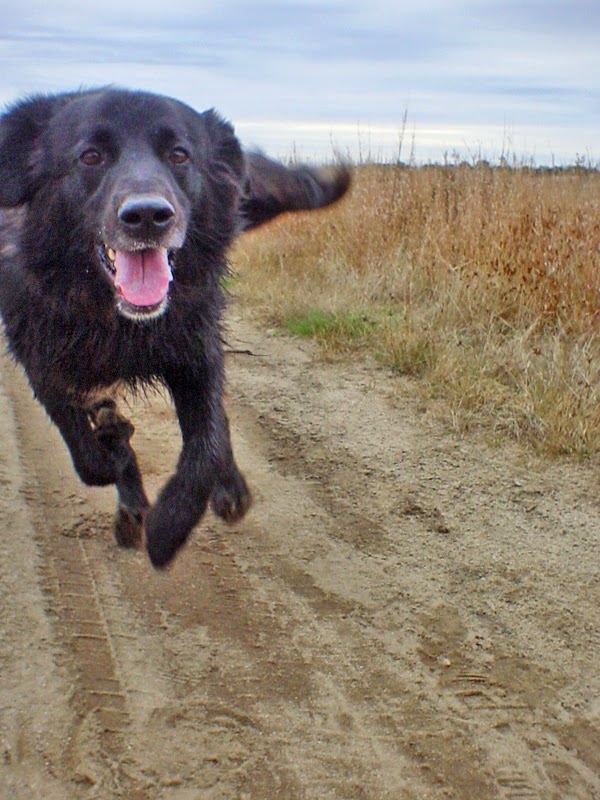 Jack is there waiting in the middle of the field, and he's got a stick. Not just any stick, but one that doesn't break when you bite it, because those sticks suck. He is sitting up straight and tall and I can see his white spot on his chest, and he lifts his ears when he sees me coming. He picks up his stick and comes to me. And I touch his head, and feel his rabbit-soft fur and get pummeled by that tail wagging hard against my leg.

I throw that stick for him as we walk forward towards the mountains.  And every single time, he's running that stick back to me. We eventually make it to a pond, and you know what happens at the pond. I throw that stick, but not in the direction he's facing. I'm totally to faking him out. His ears shoot up when he hears that stick hit the water surface, and he switches directions like lightning, runs and jumps to go get it.

There are other sticks in the water, but he finds this stick because my scent is on it. It's been in my hand all day, and I've thrown it for him. It is our stick. And he brings it back. And we do it again and again. We walk along the pond shore, with me throwing the stick and him going for it. Over and over.

We come to a cabin. And that's where we live. He smells like wet pond dog and ozone and sunshine as we fall asleep in front of a woodstove full of wonderful dry wood.

Then we get up and do it over again.

No rainbow. No bridge. Just me and Jack dog. And that's how it's gonna be.
Posted by Christine G. at 3:25 PM 5 comments: Links to this post