When the contract job ended, my then boss "S" told me that literally the minute someone on the team gave notice, she would be calling me to offer me a job.  One of my former co-workers gave her notice on a Monday morning in early March, and pretty much by noon the Boss S texted me and said "can we talk?" She wasn't kidding.

She had to post the job internally for 2 weeks and the job goes public today and will be open for 2 weeks for the "interview process...." She's encouraged me to apply for it. And verbally I think the job is mine. I would be the only candidate with the training on the products unless someone from a station that uses the products applies for the job, and that most likely in all the world will not be happening.

And so, I have done that. At about 1pm, I did apply for this old but new job.

I think she loves me, and she has said things to me about my personality, and how  I bring something to the team in the form of care and passion that she values deeply. She was very unhappy to let me go. And I think if she had not had to let me go, my co-worker who left might still be there... and we'd still be working together (which was great) but the fire wouldn't have been lit for her to find a job that she wanted more and to leave.

There are several pros and cons to the decision I may have to make shortly. I'll try and outline them, mostly because I want to remind myself later of whatever my decision was/is, so I can thank Past Me or kick Past Me's ass.

Cons:
The New Job
Pros:
Cons:
So yeah. Those are the pros and cons.  Doug said the money alone is enough to make the decision. He wants to move closer to Boston after Geoff graduates, maybe in the fall or next spring, so he thinks I need to put on my big girl pants and go back to the job in Boston.

I'm sure the money will be hugely helpful. We could buy a car. We could pay for both kids to take classes. Money is nice.

I'm just not sure that walking away from this job before we get the sites rebuilt and optimized and rolled out is something I'm comfortable doing. I feel awful about the concept. But if I choose to stay here, and then find out I'm being ousted in say June or July because he has a change of heart about how he thinks the job is going, that will suck (sounds all very Alice in Wonderland, I know).

Posted by Christine G. at 3:19 PM 2 comments: Links to this post 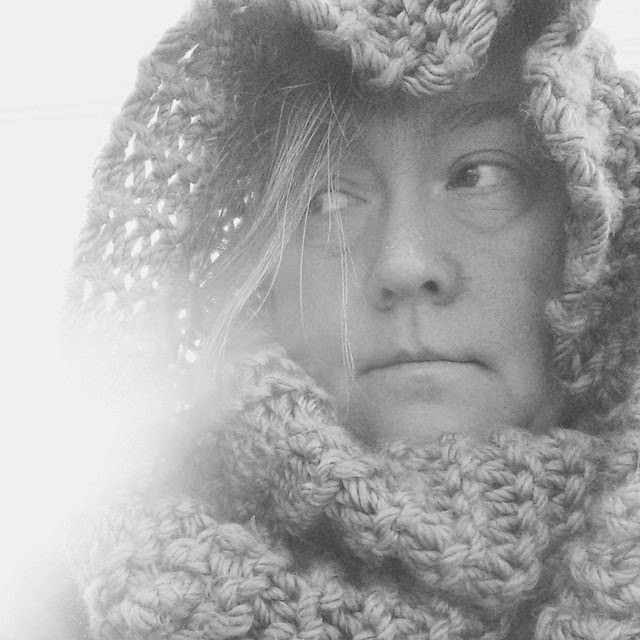 One particular day, I found myself alone here at my desk. I was a bit ADHD and very cold. So I took this picture of myself.

I normally do not like pictures of myself. I look fat and stupid with a big Peter Griffin double chin so the scarf helped out this one a lot. I put this through a filter on Instagram, and it caught the sun coming through the window behind me. The black and white helped out my skin tone.

The only thing I really would have liked to have done is  blend out the circles under my eyes... but this was the day after Jack died, and i think it holds a certain sadness.

Posted by Christine G. at 5:37 PM 2 comments: Links to this post

My contract at work didn't get renewed at the end of January. I had gotten to the point where I was pretty solid on the support I was providing, and learning still. Which is always good. I felt like 80% of the stuff coming into the helpdesk was a drop kick done deal that I could answer, 10% was stuff I had to question and then 10% stuff that didn't overlap with me.

So feeling safe and happy was good. I also had gotten to the point where there were a few people (out side of our building, people who sent in help desk requests) that I wanted to never hear from again. Two maybe. Which is a tiny fraction of the people I had to deal with on a regular basis.  I suppose that is bound to happen in help desk work.

When I knew they weren't renewing my contract, I started looking for a new job and I secured one, which started one month ago yesterday (a short month, but a calendar month nonetheless). It is very close to home, only a few miles and a few minutes of a commute. The view is outstanding... and it is hard some days for me to focus when I get to sit here and gaze out upon the gorgeousness of the Merrimack River.

It is kind of a good thing that my job ended when it did because the commuting into Boston situation was sort of impossible for a couple of weeks, and for some is still impossible. Doug said it took him over 3 hours some days to get into work. And if he had thought he'd put me on the T on his side of the Charles River to try to get to my side of the Charles River, more often than not I'd pretty much just be stranded because the T essentially ceased to be.

February 2015 goes down in history as a commuter's nightmare. And from the people I'm still in touch with at the old office, it sounds like the city has just given up totally, and the hope is that spring will just melt the snow away.

My sanity rejoices for this commute, and being here. And I can make a nice big dinner and pour a cocktail or pop open a bear for my road warrior husband when he finally gets home long after 7:30pm. The poor kid.

So the job. My title is Web Manager. Sounds reasonable. It is a 5 person office. I had two half-days with the girl I replaced. The replacing was awkward, I think there was a money issue or personality issue or something between her and the boss... and he decided to get rid of her and bring in someone else... She's lovely, really. And in real life she and I would be best nerd friends ever. She trained me to the best of her ability with short time of my being here, but I feel that I really needed her for a week. I'm trying to make do. Or is it make due? Anyway.

I got hired to do a job that I thought was as simple as updating text in a newsletter (InDesign) templated by someone else, saving it for PDF posting online, and updating content on the website. I quickly found out that my job entails:
Outlining and detailing all the challenges and house fires I've had to do since starting here does no good. I am boring you to death as it is, I'm sure. I have posted the newsletters for this month (it only took me 4 weeks to do it), I have revised, tweaked and fixed this book a million times and yet the senior editor still keeps coming back with "oh, I missed this one thing can you fix it?" So it just went to the printer for proof today. We are getting ready for the March content. We're talking about site redesign and what we want to see in the new layout on the User Experience front and back end. I drew up a little mock-up for the front page of the site and the office manager loves it. We'll see if anyone else agrees. I just realized I need to post the one-off "a la carte" tests for each the newsletters and the instructions on how to do that are so bat-shit crazy I can't even.

The literal saving grace is that everyone here is cool. So cool. There is no yelling. There has been panic, and the 4 co-workers I have who I deal with most all have great senses of humor, so it is super nice. We joke around about needing valium or heroin to get through the crisis du jour.

And the view. The view is pretty sweet... 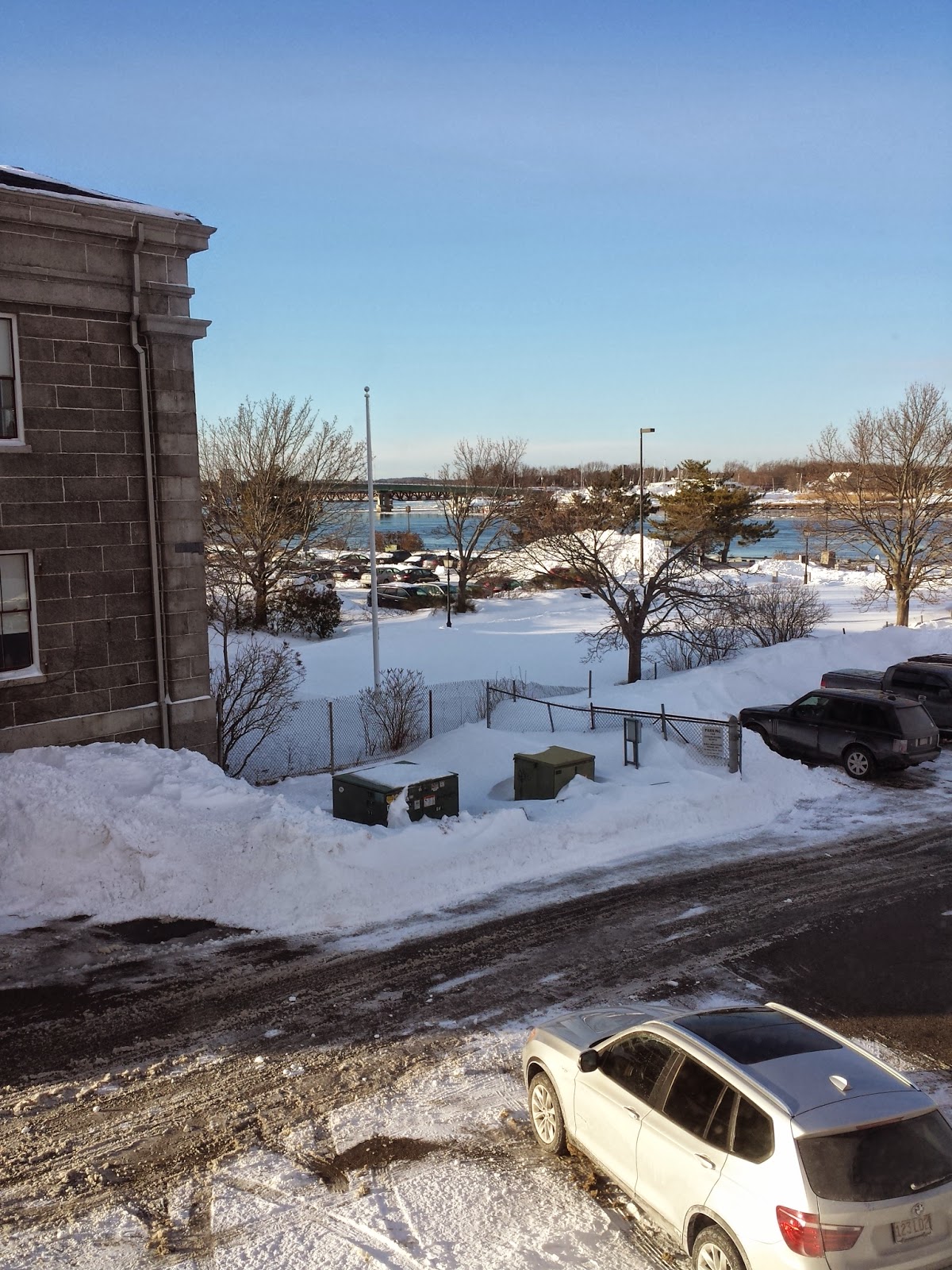 This is the view from my office window.
I am longing for the snow to be gone, and walkies to happen. 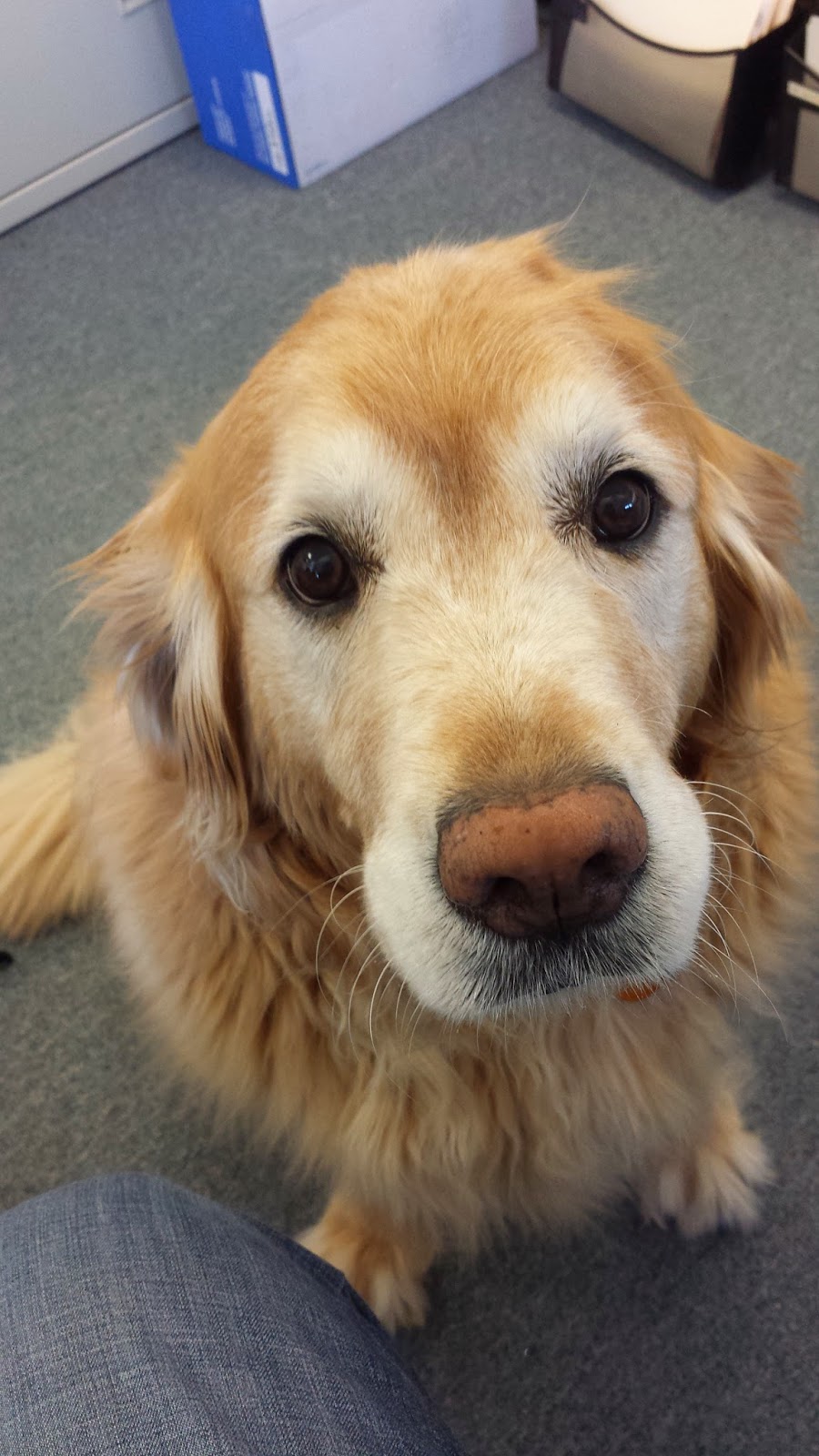 And my co-worker has this dog.
She came to visit and it made me very happy.

Posted by Christine G. at 5:15 PM No comments: Links to this post