A friend of mine was selling a couch. He moved into a condo closer to the city and when the movers brought his couch it didn't fit in any of the rooms. 96 inches long.

We measured our space and it would more than fit, we'd have another foot and a half beyond the end.

So I decided I'd buy it.

We rented a U-haul van near his house and went over to pick it up. Thankfully, it is a light-weight couch from Bob's Discount Furniture and not a sleeper sofa from Jordan's or something.

Doug and I managed to get it down the stairs successfully and into the van.

We came home and Doug, like a bull in a china shop, started pushing things around to get the gross old dead couch (missing a cushion, beat up over the years of use, we were the third family to own it),  out of the living room.

I scrambled to move the rug and pick things up that were flying all over the place. He gets like this. This "DO ALL THE THINGS!" kind of spirit, like when he painted 3/4 of our living room walls a few weeks back (wall 4 will e painted when we pic an accent color, as it is the wall where the TV is...)

But we can't get the couch out of the room.

He has no recollection of how he, Geoff and Thane got the couch in here in the first place.

We sat on the cushion-less old couch (those cushions had been thrown into the yard in his efforts of fastness) and he tried to recall how the couch got here.

He realized it probably came in through the back porch.

The back porch: Where boxes and things we didn't exactly need or want to move to the attic just ... landed. In August 2013. when we moved in.

More things have moved in there since the big move-in. So it is kind of a mess. Ugh.

And now I need to kind of make it so we can get out that way, since we cannot go out the other way.

It is a project I've been meaning to do forever. And every time I look at it I groan. You've got to be joking me. This mess? Ughhhhhhhhhhh.

Last night we did some organizing and got the couch out of the van so we could return the van (which we are going to do after we watch some football.

But I gotta get out there before Mister Bull In A China Shop does and he just makes an even bigger mess out of the situation.

I feel like I need to take a day off of work this week to do this. Let Doug and Jess head into the city and I'll stay here and crank up the tunes and just clean up. 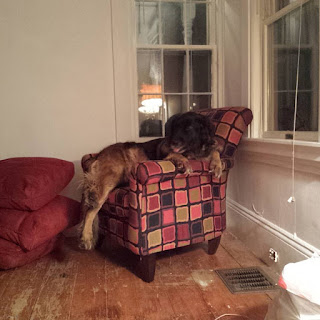 In the meantime, dead couch is in the kitchen.

We have another couch in the living room that Doug wants to put in the front room. I'd rather have Jess take it and be done with it. When we bought our last house the previous owner left it for us since we'd have more than one room in the house that could be used as a living room and he thought we could use it. But ... It's gotta be like 20 something years old at this rate and for the past 10 we've sat the hell out of it.

We got an accent chair with the couch purchase so Doug is perched in that.

In fact, here is a picture of Liz's dog trying to get comfy in it so she can look out the window and watch for mom.

Apologies for the floor - That's not a real priority for my landlord but this room would be so nice with  beautifully refinished floors. The exposed area there is where the old couch was, and the new couch will be.

And it just goes to show with out lives. A small thing turns into a giant super unbelievable thing. And it is complicated when all you wanted was something small and simple. A couch. that's it. But now I gotta do a billion things.

No wonder I'm so dang tired all the time.
Posted by Christine G. at 1:09 PM No comments:

Jess and her friends are getting an apartment together. I refer to the friends, lovingly, as "The Weenies." It kind of stemmed from an episode of Sponge Bob Square Pants about "Weenie Hut," and I referred to their (the 3 friends) place as such. "So, you going over to the Weenie Hut today? Hang out with the Weenies?"

And then, the nickname just stuck.

The lease on the Weenie Hut ran out at the end of September. They had been actively looking for a new place but had not yet found one. The landlord didn't want to renew on a month-by-month,  so they moved out, with no particular place to go really.

One friend, Liz, came to stay with us with her big giant dog, Capri. The other 2, Sarah and Eric, have been bouncing back and forth between their parents' places.   They actively were seeing a place, and I was finding things on Craigslist and a Realtor friend of mine was pulling listings. Things were either getting rented before they could call or they were out of their price range, or, there were issues.

They ran into the usual "we do not want to rent to people like you (meaning 23/24 year olds), thanks." They encountered the "oh, you have a dog? No dogs. Thanks." They also ran into "this  is perfect but it is too expensive for us," and the alternative "this neighborhood seems a little too stabby for my liking" when things were in their price range.

I was beginning to think we'd have Liz for the winter because there aren't many rentals to be found for December move ins. And Doug and I were okay with that. Sarah and Eric really needed to find a place.  He kept bringing them to horrible apartments in complexes and in really dangerous neighborhoods just saying "this one is great! Let's get it!" But Jess and the other 2 girls weren't convinced. He was getting frustrated and they felt he was pushing them into less than ideal options just to get in a place.

But they found a place two weeks ago and signed the lease last Saturday. After all the "out of our range/too stabby/no dogs allowed places," they secured an apartment in a multi-family house about 20 minutes from us in a decent neighborhood. Convenient for Eric and Liz to get to work, a bus that can get Jess to the train station (which is only 3 miles away), dogs allowed (after negotiation). Because of Liz' work schedule, she gets home at 5:30 or 6 in the morning, so easily she could give Jess a lift to the train.

All told, it looks just right.

Keys are in hand and the kids have been there painting since Monday because carpeting gets put down today.

Geoff offered to help move. Which I thought was very sweet of him.

In all of this, I'm weirdly unemotional, as is Jess. I ask her if she's excited and she shrugs her shoulders or gets defensive about me asking questions.  Jess is probably best suited to live alone because she is really introverted at times and retreats. She would retreat from us by going to hang out for days at a time at the original Weenie Hut, and then retreat from them and come stay with us. So in the best of all worlds her own place would be ideal but affording that, even with making really decent money, isn't a reality right now. I'm interested in seeing how this all pans out. I especially want her to be happy.

She said she's not in a hurry to actually move in yet, that she wants to paint her room, get organized, purge and purchase. Make a new nest all of her own instead of the things she's had for ... 18 years or so.  I think I'm going to buy Walmart gift cards for them because Eric gets an employee discount there. The money can go farther when they shop for what they may need.

Once she is moved out we'll go and paint her bedroom, which 2 years ago she got halfway through priming and did not finish. It is true, it is easier to paint an empty room. I would like to get a nice bed for in there so guests can finally stay with us when they visit instead of having to stay somewhere else.

While we're there. Who knows where we will be a year from now.