Early in December Geoff casually asked me what my favorite scent was in a candle.

"Why do you ask..." I knew exactly why. "Are you going Christmas shopping?"  Immediately I envisioned the horror and chaos of him trying to negotiate a busy shopping center parking log during the holiday season. I started to sweat and panic.

"Well, maybe. I might head over to K-mart, maybe," he answered.

Whew. Well that's a relief. If he's going over to the K-mart, there's hardly anyone ever there, they have a huge side lot near the gym he goes to that he can park his car in and be away from all other vehicles and pedestrians.

I relaxed and stopped seeing visions of him crashing into everything and scraping cars while trying to squeeze the jeep into parking spots. I told him I like things like pine and cranberry and cinnamon... It is easier to say what I don't like, such as vanillas and tropical fruit.

Doug came in the other day with a huge grin on his face and said, "I think I found Geoff's secret stash of things he bought us for Christmas. There's a trash barrel for the kitchen, and a rake, and some candles and a picture."

And indeed, that is exactly what Geoff got for us.

He bought a small trash barrel for our kitchen. We keep our trash up on the counter by the sink because otherwise the dog eats out of it and pulls it over. The one we had was falling apart, and tilting sideways. So he got a nice tall, thin, sturdy one for us. And he got Doug a rake because our rake was kind of crummy and missing "teeth," as he calls them.

I asked Doug if we failed at modeling good gift giving skills for the boy, or if we raised someone utilitarian and practical. If he got us a trash barrel and a rake, how strange is that?

And he indeed bought me cranberry votive candles, and printed a picture of himself and our dog Jack from 2 summers ago.  It warmed my heart that he thought to do that, and that he remembered me saying how much I love the picture. And that I didn't only get a trash barrel for the kitchen.

He told me he purchased the frame at K-mart and printed the picture off his phone at the library. The print out is horrible, the tape job on the back is a wreck. The frame is weird and square, but the picture fits in just fine.

All told that's one of the nicest gifts I've ever gotten from anyone.
Posted by Christine G. at 10:58 AM 1 comment: Links to this post

We come from the land of the ice and snow...

In October we found out that our holiday party theme would be Scandinavia.

Now, I have a soft spot in my heart for all things Denmark (for reasons I'll save) and over the years I've learned a lot about traditions in the Nordic lands. So I volunteered to help out (aka, run the whole shebang because I like to throw a good party) to make us have a rather unique and authentic Scandinavian "Jul" festivus.

Initially I'd asked my girl Jo if she could cater, but she was super booked and she referred me to some friends. There is a committee of people in the office who work on these things and initially I overstepped by being too enthusiastic. So right off the bat I pissed a couple of people off. I backed off and let them pick another caterer (I think my referral would have been just awesome but, I digress).

I'm not unhappy with what we're getting. We got a good deal on a caterer through one of the people on the committee who has a friend who was willing to hook us up for under $700 for the main dishes. A baked ham in mustard sauce, double roasted potatoes, chicken with a lingonberry sauce, mac and cheese for the kids, some green stuff and a veggie lasagna for people who can't eat meat or whatever.

I volunteered to make Swedish Meatballs (thank you Alton Brown for the very simple and easy recipe!) and Glogg (spiced wine).  I went to a European Market in Peabody MA and got hooked up with salmon, roe, cheeses, sausages, lingonberry and cloudberry preserves, elderflower and lingonberry concentrate for cocktails. 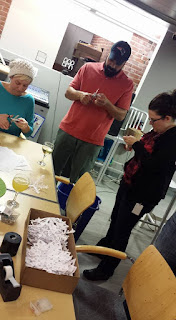 One of the most beautiful things was when I came into the office last week with all the supplies that I'd bought at the European Market, one of my co-workers just burst into tears as I unpacked the stuff and began arranging it on the counter. She spent a year abroad in Germany and while Germany isn't Scandinavia, there is a lot of cultural overlap. The cheese, the rye crackers, the little sausages, more cheese.... it all kind of flooded back to her, how well cared for she was that first Christmas really far away from home. I didn't anticipate that anyone would be moved by a box of marzipan.

I printed dozens of templates for snowflakes and encouraged my co-workers to sit in the kitchen and cut them out. As evidenced here, they picked up scissors and cut out bad ass snowflakes.

We are stringing them up on tooth floss and hanging them from the beams.

I bought 4 strings of lights and other people brought even more in. I wanted our kitchen to look, and I laugh, like a snowy sweet little fairy tale or something. I wanted the concept of 'hygge' of which there isn't an English equivalent but to me it invokes a cozy and safe feeling amongst your family and friends.

I went to a little store down the south shore that sells all Swedish and Nordic goods, and bought a lovely assortment of decorations for the event. So many halla horses and Julboks. So many.

I'm going to hook the Apple Play monitor up with a video of a Yule Log burning. The lights, the little decorations, the snowflakes, the food, the booze.

I think it looks slightly amateur but also incredibly delightful (pictures to come, of course).

And above everything, I think it looks honest.

We set up a yankee swap (which I renamed Viking Pillage) and an ugly sweater contest. I actually bought myself an ugly sweater. And I cannot wait to wear it.

Tonight, I find myself building a Holiday playlist in Spotify with requests from people from my office and an over-helping of Barenaked for the Holidays, of course. Natch.

My Glogg simmers on the stove and my house smells like a sweet, sticky and strange place, filled with cardamom and wine and oranges and cloves.

Last year at this time I was baking a shit-ton of Caribbean Black Cake thinking I'd win a contest that someone would actually judge. This year? I think I've contributed quite a bit.  And while there are so many things I could have done earlier, I will be in bed before midnight this year for sure.

My husband cannot come to the party, he had gotten hornswaggled into something with our church tomorrow night. So I'm hoping I don't drink too much Aquavit and can't get myself home.  I will miss him. And I think he would love our Julfest party. I'm sad he will not be with us.

So here's what's on the agenda tomorrow:

Cocktails: I have the Glogg (I hope it tastes as nice as it smells?) We have that bottle of Gammel Dansk that the Danes brought when they visited last year and will challenge anyone to drink it. Aquavit instead of Vodka.  I have 2 recipes for cocktails that mix the Aquavit or the bottle of Gin that I bought at a local distillery in Everett (with cardamom, lavender) that mixes either Lingonberry or Elderflower concentrate with one of the two alcohols, with a splash of soda water. I can also make non-alcoholic versions with just the soda water and the concentrate. I think I need to get sprigs of rosemary and make lemon twists up. We also have Danish and Norwegian beers.

I promised myself bed before midnight, so I ought to get to that. I just realized that I do not have a present for the Viking Pillage (oh noo!) so I may have to run into CVS tomorrow morning.