"I am hopeful, should I be hopeful?"

I think for the past couple of years, I start the new year saying that I will write more...

I will write more.

Aaron and I talk about writing the great American novel, and we chat about it on the phone and have our storyline. But we have no ending.

It's hard, that.   Coming up with a good ending. Maybe it is best if you start with your ending and work your way backwards from there. That's the way to write a solid narrative. But I always feel like our story has to end when we have no stories left to tell, which means, in death. Sadly as that is. I somehow don't have a concept of ending a narrative while the characters still live. Because of "what happens next?"

If you know how it ends, even if it ends with death, you can build up to it. That just feels more natural, and complete to me.

It always reminds me of the line from Guster's "Hang On" where Ryan sings that we're inside a novel waiting for an end, but we don't know the authors of the book...It's probably a good thing we don't know the end. Or, at least I hope.

Watch if you want to. This is a lovely live in-studio version that I'm very fond of.


So here we are at the end of 2016. I haven't written much. Not here, and not in my great American novel.

I know 2016 has been exceptionally rough for a lot of people, not just because musicians and actors have died.

Sidenote: My friend Barb wrote a very good summation of why the death of celebrity icons matters to so many and I'd suggest you go read it.

While it hurts so much that we lost so many pretty things this year, it also hurts horribly as I watch from the sidelines as many friends lost parents this year.  Many more friends are on the verge of losing parents next year. In my wider circle of friends, two children of the extended circle died from opiate overdoses, two friends lost their spouses to cancer.

Thing is, I don't think 2016 is more awful or more horrifying than any other year that has gone by, or will come around. I'm just hoping that we catch a break for a little while at the beginning of  2017 so we can catch our collective societal breath.

Having just turned 50 (oh, and SO full of knowledge and experience, wit and wisdom obviously) I guess we're all just at "that age." The age when people start dying around us. The age where people we admire and love start dying. Our parents are not the 50 year olds we think they are - we are those 50 year olds.

When Doug and I were in Arizona, I hugged my aunt goodbye. At age 84, you wouldn't know it except for how she looks. I told her I feel like she's in her 50s and I'm still 17. That's honestly how I feel.

I think a lot of times we all feel that way - we feel far younger than the calendar says we are, so when someone dies we find it just unbelievable that something like this can happen in our lives. But it's true.

This is to be expected, and it isn't going to get better or easier. And craptastically, we can actually expect more of this.

We should brace ourselves and be ready for the starlets, the singers, the parents and sadly yes, the children, to fade around us.

Sorry.  I'll get to the point I'm trying to make. 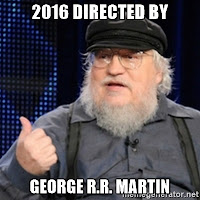 In "Game of Thrones," there are two sayings of the Braavosi slaves in the language of High Valerian (nerd!) that carry a lot of meaning. Valar Morghulis and Valar Dohaeris. The first is all men must die, the second is all men must serve.

Flip sides of the same coin. All men must die, all men must serve.  If you want to go off on a tangent, this Quora article is particularly good. You can go and come back, or go later. Your choice.

I always found that interesting.  The phrases are taken from people of slavery in the books and not free people. It's rather fatalistic that your two lots in life are servitude and death. Work your ass off and then be done with it and gone and forgotten. Just like that. Servitude is mandatory, and at times brutal, unwanted, unpleasant, and if not done correctly can result in the Morghulis side of the coin.

One can put a nice tidy Christian spin on it.  Our lives are indeed meant for servitude to one another and that a life of service ends in death yes, but also there's the follow up reward for the "good and faithful servant."

We have the option to pick and choose what our service is. And I know a fair amount of Christians who talk a good game of service but do nothing. I know I personally fall short. Spirit willing/flesh weak, or bored or distracted kind of thing.

And I think on friends who aren't in the faith, who work their asses off serving others, through their jobs or volunteer work or however they do their flip side of the death coin, and think about the concepts of "Service is its own reward" as I've heard some say to me in the past.  Service in and of itself is life.

As a "free" person, not a Braavosi slave, I guess I have the luxury of determining what Service is. When I apply it, when I shirk from it. And in the end, that is my life. All men must serve, and all men must die.

We don't have a choice in the latter, but how we get to do the former is entirely up to us.

Whatever we're doing on this walk together, whether we walk with God, a god, a concept of some deity, or none whatsoever, we are indeed walking it together. And I like to think that to one another there is service of love.

I know that's not true for a lot of people out there these days, and for me, that's been the hardest part of 2016. I think that while there is obvious violence and hatred towards one another happening around the world (Hello, Aleppo) in the United States there has been a lot of verbal and social dickery happening that just builds and builds. And hopefully, we don't become the beasts that we are behind our keyboards in person to one another.

I suppose thinking about death happens each year at this time. It's only natural. I've gone off on one hell of a tangent here though so I should wrap my sermon up.

Again, not knowing how to end things is my problem. I should sum up with some sort of pithy, witty sentiment. A pink fluffy or a Bible verse that says it's all going to be okay. I don't have any of that right now.

I'm sitting here at the end of a hard year, knowing that good things happened (I can list them at the bottom, I guess) but knowing that years to come are going to suck.

I know that several people have written online that 2016 wasn't the "worst year ever," by listing out  how many people died in the American Civil War (sidenote: how cool I am in recognizing that lots of countries have Civil Wars so I qualified which one I mean, even though if I left off American you would still know what I meant. I'm so bloody enlightened). Or how several Plagues snuffed out so many lives in Europe.

So I think I'll let the Decemberists sing about what I hope for going forward. I encourage any reader (all 3 of you) visiting here today to watch this video and listen to Colin's lovely voice walk through a narrative of what to do in looking forward, hoping for the future, and the uncertainties of it all in only the way he can. I am hopeful, should I be hopeful?

Yes I should. And I will. As I serve with the sunlight, the shadow, the quiet, the word, the beating heart, the ocean, the boys, and you, my sweet love. Oh my love.