And Now, I Live In Maryland

I've told saga of our moving adventures twice before. This time, not as much saga. Having a company move you is a different world. The only problem this time was that I couldn't pre-clean a lot of things that I wanted to, so they got packed and moved, dusty. So now is the unpacking and cleaning portion of events.

Moving truck left on Thursday afternoon. Our initial plan was for me to start driving after the truck left, but I had a box of toys and things to give a friend, and she was to the north. She couldn't come down and get it, and the forecast was for rain - so I couldn't just leave it on the porch or in the garage.

Jess came with me to drive up to New Hampshire to drop off the box, and say goodbye. I took Jess home, and went to Carrie's to spend the night. Happily.

You know you have a good friend who makes you a cocktail and bacon & waffles at 11:30pm because she is worried that you did not eat.

The following morning, I still had a few things back at the old place to swing back and get, because of the stuff that I took to New Hampshire. Carrie came back with me and we did a swing through to gather items and trash to put out on the corner. The girl I hired to clean came to the house so we chatted with her a little while. And then it was time to go.

Except I had a box of bank statements and tax returns and items with our social security numbers on them, that I never got to bonfire one last time. I gave them to my neighbor Beth, and asked her to burn them. She agreed, and then she said ...

"What on earth happened to your eye?"

My eye? I have no idea. I have showered in the past couple of days but Lord knows I have not looked at myself in a mirror. I got in the car again, and pulled the visor down. My right eye was solid red, pretty much to the whole left side (towards my temple).

I tried to figure out what could have happened. I literally could not remember hitting myself or getting anything big in there. I know I got a little dust in there and rubbed my eye, but seriously - in 50 plus years I've never done anything like that. There was no pain, no obstruction to vision... but I had to go to my family doctor because what if... what if something was seriously wrong.

I drove the 1/2 hour to Jess' house - she was coming with me on the ride, thankfully. I've learned I just do not see well in the dark, and it is good to have a co-pilot. We called the doctor and they said they could squeeze me in at the beginning of the lunch hour - someone would take a look. So 40 minutes to the South East to my doctor, and luckily when your doctor has been your doctor since you were 19, he has a special affinity for you.

He looked and tested - put a drop in my eye to see if there was an abrasion. He told me that it is basically a bruise. I either must have bumped my eye, or that tiny bit of dust - rubbed my eye too hard to try and dislodge it. The blood thinners probably played a factor in this, but I'm uninjured. Just weird looking.

He said that it would probably take a week or two to clear up.

Great to hear - no damage. And now we are two hours behind schedule. But that's okay. That's alright, that's okay.

Hopped back in the car and drove like mad. Got down to the NY/Connecticut line just in time for rush hour. Waze told me to get off the highway and cut through Yonkers. Having never done that in my entire life, it was a little nerve-wracking. But we avoided a lot of traffic, and got down to Riverside Drive and onto the George Washington Bridge quickly. Traffic was a little heavy on the Jersey side - we sat by Met Life Stadium yelling about my machine being stuck in the mud way down in the swamps of Jersey.

After a while though, the rest of the trip flowed quickly. Philly - boom. Gone. Delaware bridge - zip. Done. Hello Maryland. Hello. 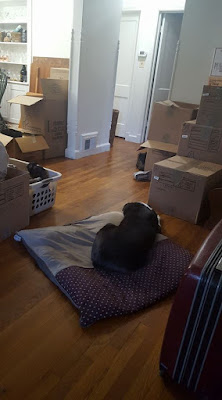 We got here around 11 pm. I was so exhausted. I didn't sleep well because we were on an air mattress (thankful for it, since floors are hard) and my dog spent the night pacing.

Jess was in the guest room which we flipped back and forth calling it "Jess' Room" and the "Guest Room" or the "office" so it turned into the Jest Room.

Movers arrived on Saturday morning - and unpacked all the boxes from the truck. And that's it. Done. Here. Maryland with my dog, my family, and my boxes.

Jess was helpful, Geoff has been more than helpful, and Doug built our bed, which hasn't been built for a couple of years. We've kept the mattress and boxspring on the floor for years, but now... Hello Bed. Hello.

Notes from this move:


Doug discovered a little bar where they make the crispiest chicken wings, and toss them in Old Bay. And yes - everything. Every. Single. Thing. Here in Maryland has Old Bay on it. I really want some right now.

People have asked about the house. It is a corner lot, and street parking. The one thing we wanted that this house didn't have was a driveway. We can live with that. A lot of the neighborhoods in the area have houses that are very close to one another, and this neighborhood is spread out nicely, without everyone having huge yards or anything. So parking is not an issue, and it is nice to know my son does not have to try and parallel park in a snowstorm.

When you walk in the front door, to your left is a nice living room with a fire place, and to the right are two bedrooms (one bigger than the other) and a rather small bathroom. There is a linen closet by the second bedroom, and the living room has a spacious coat closet. We will be using the second bedroom for guests and an office.

Walking further into the house, there is a nice sized dining room, and when you turn left you are in the kitchen. I wish it was open format - the kitchen feels way too small. The kitchen itself has all brand new, labels still on, IKEA cabinetry and a new fridge. The gas stove is a little older and was well used in the past. Turning right out of the kitchen, you go down a few steps to the left to a three-season porch, where we will probably put out some party furniture and lights, and enjoy that space.

If you turn right, instead of going out onto the porch, you go down to the large, finished basement. There is a bedroom, tons of storage (closets for days) and a 3/4 bath. This is Geoff's domain. He has everything he'd need down there except a kitchen, so he feels completely independent and happy with the space of his own. The washer and dryer are down there, and everything is nice... it isn't a scary, gross basement like our last house. A proper, honest living space.

Oh and speaking of Doug, he likes his job, his commute isn't too hellish, he says. He's home from work, and he is ready to find some dinner. Perhaps some wings with Old Bay on them.
Posted by Christine G. at 6:18 PM 1 comment: Links to this post