When the expected unexpected thing happens

I got a phone call on a Monday.

Great. Of course you did.

When we were deliberating whether or not we should take the offer to move, as you, dear reader may recall, worrying about my parents and their health and safety was at the top of my list.

I was in Maryland for a little over two weeks when I got this call. I wondered if I jinxed us by worrying at all in the first place, or if it was just statistically inevitable at this point.

Both of my parents have had relatively good luck health wise. My dad only recently started getting sick and having issues, and my mom has really only had bronchitis which landed her in the hospital. All told, they don't get out much, don't do much, don't behave in a risky manner. Aside from decades of smoking and my dad's drinking. I have to admit I've always been surprised a little that they've made it into their 70s. 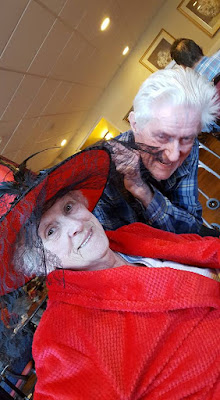 But on that fateful Monday, the trash barrel started to roll away down the slope to the road and my mom chased it, instead of just letting it go and landing wherever it decided to land. And in chasing, she took the spill, landing on her left hip.

She was taken by ambulance to the hospital, where X-rays and examinations revealed the break, up high on her pelvic bone. She said repeatedly "If you're gonna break your hip, that's the place to do it!"  And I guess it is true because your hip joint isn't involved, so no joint issues or leg issues.

Surgery was on that Wednesday, and the doctors told my sister it went very well. Linda drove up on Wednesday afternoon, I flew in on Friday. I picked up Jess and we were able to have good fellowship with my sister and my dad. We visited with a friend of mine from college who lives literally around the corner from my parents, and adores them. She has offered to do them many tasks and duties - and I didn't get to see her before we left for our move so it was great to connect. And I knew she'd be a good neighbor to have.

My parents frequent a bar/restaurant in their town and due to my mom's chatty-Cathyness, they've made a lot of friends. I began getting notifications from strangers saying that they were bringing my dad to visit her, or they were taking food to my dad. People were making sure that everything was operating as well as can be expected.

When I was in the hospital, we had all the church ladies and friends stepping up to offer help for Doug (who basically refused things because he's pretty capable. He can grocery shop, cook, and clean... but my dad is a whole different person). We had that community, and initially, I thought it was weird that "strangers" from a bar would be my parents' equivalents of that kind of fellowship. It began to sink in that this is where they "worship" as it were. A few times a week, dad plays Keno, mom chats with everyone and sings "Born to be Wild" at the bartender named Shorty (her real name is Cheryl).

They have their community. It's a little different than what I have had, but it is no less powerful, loving, and responsible a fellowship. So I'm incredibly thankful for that back-up safety net of people. One of the waitresses told me on the phone that "these aren't our patrons, they're our friends." And that made me happy.

Mom is doing well and the PT says she is kicking ass. She's a motivated-to-go-home person, very unlike a lot of people who end up in PT at age 73. She says she is sore all the time because she's working so hard at this, but I told her that's to be expected when all you've done for about 40 years is drive a car, smoke cigarettes, and sit at your computer. No offense intended. But if you're not even carrying groceries into the house you're not getting much of a workout, so yeah... you're gonna be sore.

And especially when your legs need you to use your upper body strength to get around, by wheeling your own wheelchair or pushing your walker around, welcome to that reality.

They are planning to send her home next week, which is good for her. And soon she'll be back at their bar, welcomed like a returning hero from the fray.

I was hoping to fly back up after she got sprung from the hoosegow, but I'm not sure we can afford it. We're suddenly very low on money here, and it is a little nervewracking. First, Doug bought Geoff a really nice, really really nice bed. I mean, Wow. He needed a new bed, and the temporary air mattress he was using sprung a leak. But I didn't expect that my husband would go to the store and buy a bed for him as expensive as this is. "It has a 20 year warranty!" he says to me. "He'll be 40 when this bed is worn out! Think about that!"

I don't really want to think about Geoff being 40, and me being 70. Thank you.

Expensive beds said,e we have to replace both of our cars because they won't pass inspection in Maryland (long story) but they probably would in Massachusetts (go figure). One of them sooner than the other. Geoff had a small accident this week with one of the cars - resulting in both side mirrors getting whacked off.

Picture this, if you will: He went to change lanes to the left, and someone clipped him, knocking out the driver's side mirror. He then over compensated and bonked the bus next to him (which he was trying to pass in the first place) and knocked the passenger's side mirror off. Bus left, other driver left, and Geoff was confused about what to do. So he just went to the gym and worked out hard because he was angry, and was sure we were going to kill him.

We weren't going to kill him. After all, the car was not going to pass inspection any who. I am just disappointed it wasn't the other car, the one with no heat and defroster.

Doug went and bought a new used car from a dealer, put a down payment on it and the dealer is replacing the windshield and doing the inspection.

And get this - in Maryland, you only need to get the car inspected once. And you never have to again. Never. It's kind of a stupid thing, they inspect 100 things, and can fail you on dumb things - but you never have to get it inspected ever again as long as you own it.

We can pick the car up when we can pay for it in full, which hopefully will be this week, once we (finally) get our security deposit back from our Landlord.

We had hoped to get a futon for the guest room and start building out the "office" that we'll have in there, and get bookshelves that are uniform and match (I gave away our old bookshelves to our church so the women's fellowship could use them for their quarterly yard sale out of one of the ladies' barns.

Aside from the Shirley hip excitement, and car disasters, things are going relatively well. I'm still not in love with being here, but my little house is cute and slowly slowly we are getting our shit together and organized. I realize Thanksgiving is just 3 short weeks away. My birthday is 2 weeks away. No fun trips to Montreal, but maybe a dinner out in DC or something. Or maybe just take out Thai since we can't afford much of anything else at this point. We'll see how that all shakes out.
Posted by Christine G. at 12:05 PM 1 comment: Links to this post