Compared to last winter, this winter wasn't as bad as it could have been. Weather-wise we only had a couple of days of severe cold, compared to last year when it felt like solid weeks worth.

Longtime readers (all five of you) know that we like to go out for adventures and have fun, even in the cold. With Doug not having a job right now we've curtailed a lot of said fun and travel. I've longed to take a trip to New Orleans or to go out to see Aaron. Go to Montreal or Quebec City... but we've been staying home and not venturing far afield. Which can bring a soul down during a long stupid winter.

We go into the city once in a while. The parking at the metro is free on weekends and we can go into town and back for less than 10 bucks each round trip. Mostly we go to free things, like the museums, and play Pokemon, and have a beer and appetizer of some sort just to keep from losing our minds.

We have gone to the Folger Shakespeare Library a couple of times, and Library of Congress. The "LOC" as people around here call it, is gorgeous. A beautiful color scheme and fantastic art mixed in with great literary quotes all about the walls. We spent a great deal of time just reading the quotes and trying to figure out what famous author wrote them. Doug and I both realize that our literary education has faded off into the distant memories, as there were so many that we didn't recognize. 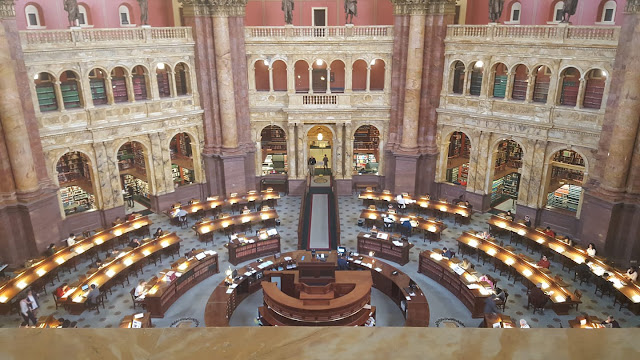 We went to the Smithsonian Natural History and American History museums. We shelled out some cash to see Peter Jackson's WWI documentary "They Shall Not Grow Old," and that was money well spent.

With spring coming though, both of us are starting to get a little more restless. Spring does that to you, I suppose. And Aslan is on the move, as they say. 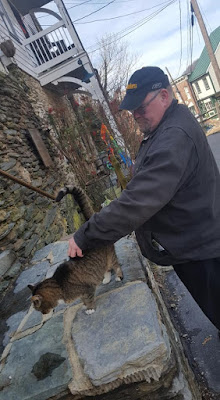 Last weekend Doug wanted to go out to the Shenandoah Mountains and toddle about Skyline Drive but it was closed due to ice and snow. We will save that for a couple weeks from now, I guess.

Instead, we went to Harpers Ferry, West Virginia. We didn't quite know what to expect on arrival and were confused when the visitors center was really far out of town. Luckily, you pay for parking and there is a nice shuttle that takes you into town. There isn't any real parking in town, a small lot at the train station, and aside from that you are out of luck unless you're at the bed and breakfast or an employee of the parks service.

I'm a big fan of the national parks, and they've done a really great job with this little town at the convergence of the Shenandoah and Potomac rivers. There is a lot of history that happened here, most notably John Brown's raid before the Civil War.

And as sometimes happens, the man who is most allergic to cats was found by a cat who wanted his affections. And he agreed.

The weather was still cool and windy, but the sun was very warm and walking around we were comfortable. We walked about a mile's worth of the Appalachian Trail in downtown and up a hill to Jefferson's Rock, so I can say I did that. Ha.

After walking around town we found a brewery, of course.

The Harpers Ferry Brewing Company sits up above the river and has sweeping views of the area. The beer was refreshing, and the BBQ food truck on site provided good eats for us to sit and enjoy being outside. For early March, I gotta say this area is a blessing for getting out of the house and being able to not freeze to death. 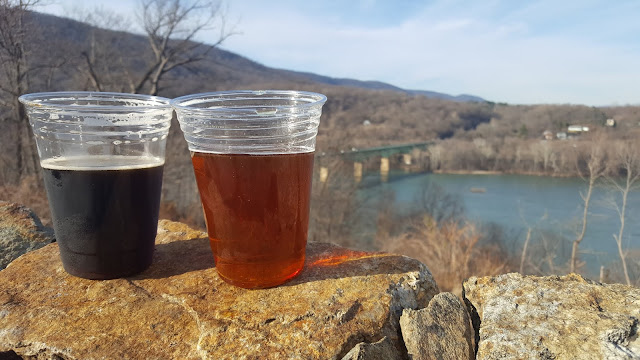 Yesterday we drove down into southern Maryland, which feels like it should be a completely different state from where we live, or from the far western part of the state.

Maryland is so weird.

We went to Fort Washington, which I think took almost 2 hours to get to because traffic. Once we got there it was a really nice place to spend time. It reminded me of all the old Forts around Portsmouth and Southern Maine like Fort Stark, and had a really cool view of DC.

We wandered over to the Piscataway Farm a little bit to the south, and enjoyed a nice flat stroll around the property looking at the pigs, cows, sheep, and buildings. This was a good vantage point to look back north up the river and see the big yellow welcome center at Fort Washington, and across the river to Mount Vernon.

From there Doug just continued to drive south. There are a lot of scenic drives and by-ways through here, and he picked one from brochure he'd gotten on a previous trip south. It is pre-pretty out, so the scenic drive was less scenic and more headache invoking, but eventually we found route 301 and some gas, and got our bearings about us to decide the next move.

We ended up heading to Cobb Island, and getting dinner at a place called Captain John's Crab House. The food was alright, the beer was cold, Doug played a couple rounds of Keno in honor of my dad. This place would make him very happy, we thought.

Great sunset, and back home.

Alright. On that note... this post has taken me like two weeks to write, I started it after Harpers Ferry. I'm sure I will have something to write next week, or the week after or after Ft. Lauderdale.
Posted by Christine G. at 12:53 PM No comments: Links to this post