After my last post about Doug and his job search, he got an offer and after his contract is over, he starts a new job. He'll have a long commute, but we can deal with that.

And there was much rejoicing!

This week he's on the road. In fact, I'm kind of super jealous because he got to go to Tucson, AZ and visit with my aunt and uncle, and ran around the desert southwest playing Pokemon without me, sending me pictures of cool cocktails from funky wacky bars and pictures of airplanes and stuff.

He didn't come home over the weekend between two trips, but was able to stay out west with my family. Which was nice. But it made me super jealous. I would have joined him but we don't have the expendable income. We will in a few months. And then we'll have some fun... (see the last entry on going to see Guster. While Doug also does not enjoy Guster like I do, I think I'm going to make him come to this show. Or he can just stroll around New York City and enjoy that like he did in Philadelphia).

While Doug is away, I've been watching hockey by myself. It isn't as much fun as watching with him. I'm also rifling through the last couple seasons of Supernatural. Doug doesn't like the show, but I do. I'm almost done with Season 14 and not enjoying it, but I have to be prepared for season 15 and ready for that finale. (Edit: Boring season ended up with amazing season Finale, which was just what I wanted).

I am also trying to do cleaning things. Doug hates when I run the vacuum cleaner (he says the house smells after it is used). Geoff and I are also hanging out together and enjoying talking about things. He got good grades in his spring semester (an A in advanced writing, B in biology, which I told him was funny because he got grades that matched the course names. "Be careful when you take Chemistry, ha ha.")

That's pretty much the update from here. We'll know how life is when Doug starts his new job and what the commute is like, but that's happiness on our part.


Posted by Christine G. at 4:30 PM No comments: Links to this post

You all know I'm a fan of the band Guster, this is no shock or surprise. Someone asked me recently how many times I've seen them and I'm trying to recall.

In the past couple years, every possible opportunity that has presented itself has been accepted for me to go see them. I hate the house of blues in Boston, but went there twice to see my boys. I don't think I would go see anyone else there.

I attended two of the four 25th anniversary of the band shows at the Paradise in Boston.

Baltimore twice since we moved here. Two nights in DC at the 9:30 club. Through the fan Facebook group, I met some people who are now "Guster Family."

My sister met us in Philadelphia to go see them and she is now a sister in the Guster fan family. Sara & Sean who live up the road, Emily & Kelsie who just graduated from college in DC here. And, Joe. Crazy Joe from Pittsburgh. And his friend Deb who lives in Richmond.

This picture was taken by someone in the balcony at the Philly 20th anniversary of "Lost and Gone Forever" show and posted to the fan page on Facebook. It's during the song "Hang On," and it's kind of like church for me in a lot of ways.

If you're not familiar with the song, here it is. Please watch.


I brought my sister to see them in Boston, it was part of the 25th anniversary shows and according to Ryan Miller (lead singer) apologized for how weird everything was that night for if it was someone's first show... And it was. They had a giant spinning wheel of choice, and if the wheel landed on the same song twice, they'd play it a second time at double speed. It was a night of rarities, and some karaoke too, where a guy played guitar ("No! That's my job!" yelled Ryan) and sang Demons perfectly, because his high school a cappella group sang it, and that was his song.

Linda was hooked though. She knew two songs going into it, and she was in love.

Earlier this year, she won tickets (through the FB fan group) to go see them in Fort Lauderdale in April.

She told me I had to come with her (of course) and she bought a third ticket so her bestie Ginger could join us.

Little did I know...

Linda set into motion several plans and schemes. She bough Jess a ticket and flew them down. She invited my good friends Michael and Jon to join us but they couldn't come to the actual show. She asked Carrie to come down, but Carrie had been traveling so much that she declined due to the need to be at home for a minute.

I had my own plans and schemes for this weekend. I emailed the band to see if there was a way we could hang out after show with them, because I thought why not make Ginger's first show experience unforgettable. I told them our names, and the drummer Brian said that we were all set for after show.

My sister was already in Florida, and I forwarded the email from Brian to her and told her to let Ginger know "because I wasn't sure if Ginger liked surprises like that."

My sister got my email while they were on the way from the Airport after picking up Jess. The first big secret. Realizing that Jess would not be on the guest list because I didn't know about her coming, Linda emailed Brian immediately to get Jess added to the after show.

She told Brian that it was a surprise for me, that I had no idea Jess was coming.  Brian thought that was very sweet.

More secret things happened during the day on Friday, I flew down and they lied to me that they were late picking me up because of traffic. They were really late because they had been prepping for my arrival party.

Jess was back at the house making party food with Steve and Jason. Michael and Jon were on their way over to Ginger's house.

When I got there, Ginger gave me the tour of their new house. We got to the bathroom off their bedroom and Ginger said that she had a big claw foot tub in there... opened the door for me to see, and Jess jumped out of the shower and yelled something like "and also me!"

And yes, I was completely surprised.

Steve showed me the office, opening the door to reveal Michael and Jon sitting there pretending to do work at the desks (hysterical).

What an incredibly joyful surprise. We spent the evening entertaining our new friendships, Jon and Michael were new to Linda and Steve and Ginger, so many multiple conversations were happening all around in circles. It was a riot.

The next day we floated around in the pool and had lots of laughs. I won't post the video of my sister attempting to mount the large inflatable unicorn.

Sunday we went to Jason's Plywood Regatta and then the hotel where we'd be staying for the night in Fort Lauderdale. Got to the venue early, and enjoyed the opening act (Saintseneca, great harmonies and super friendly humans). 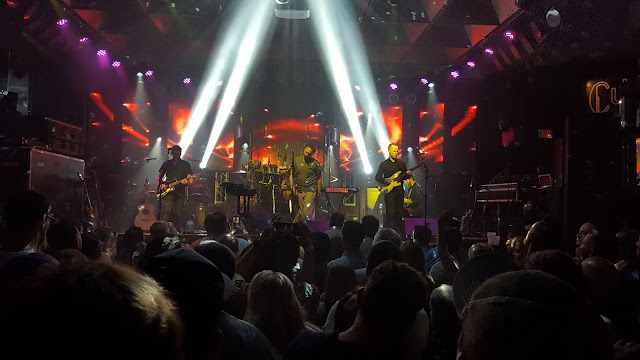 The venue was really small, so while I'm against the back wall here, I am about 20 people deep. There had been opportunity to be about 3 people back, but I liked the wall for leaning, especially as it was a small room. It was hot as balls, because Florida. 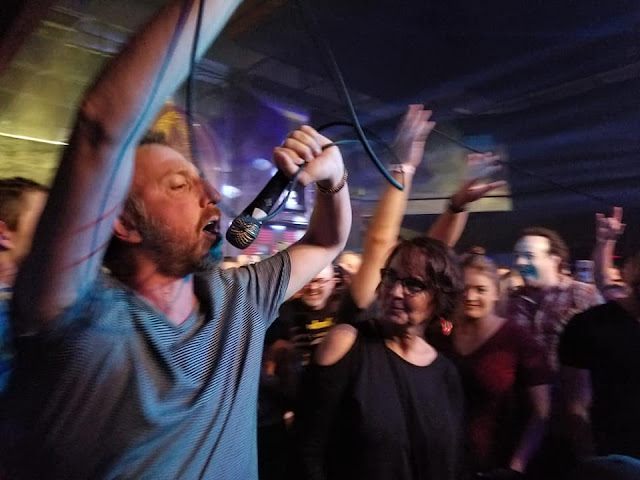 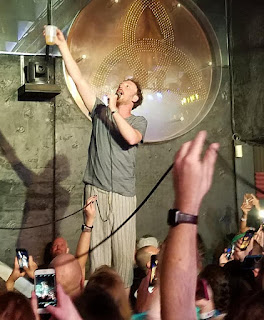 My sister got these nice shots of Ryan during the song "Doing it by myself" where for the past several years he's come out into the audience to sing. He gets himself into wacky positions, and this particular night he went up on the 3 people deep balcony, came down the stairs, danced on top of the bar and drank someone's drink.

For a middle aged dad, he's kind of a riot. The extra funny part is he uses a corded microphone, so someone on stage has to do the cord maintenance. And the audience helps a lot too.

After the show, we had our fancy wristbands so we got to hang out. I was talking to a couple other fans when Brian came out, headed straight towards me and hugged me.

"Did it work?! Did the surprise work?" His face was beaming, he was so happy.

First off, I was kind of astonished that he knew who I was just on sight without me walking up to him (blame Facebook profile pictures and relentless posting in the fan group, but he's a member too so he knows who we are. Which is very cute when you think about it).

And I was happy to report that yes, the surprise worked. I was able to introduce him to Jess, and to Ginger at her very first show. And to my sister, who arranged the shenanigans.

"I love surprises!" he said. And that made me so happy. We had a lovely chat, and I then got to talk to Adam Gardner. I told him about my dreams of opening a brewery and all the songs were named after Guster songs. I ran down the list of some that we'd come up with. Our flagship beer is "Hoppier" which is a very hop-forward IPA. Adam thought our idea was genius, and he commented that so many Guster fans were super talented and crafty, mentioning the Gustard mustard and the handmade fan made soap from Lisa Shea's soapery.

Mine is just a dream, but he's right. There are some downright clever and fun fan side projects.

All told, a fantastic and fun night. I finally got to talk in person to two members of my very favorite band.

What's next? We will see them in New York City in August. And again, I expect to be super sweaty and gross but ... for this band? Yeah. I'd do that. Every day I'd do that.

Posted by Christine G. at 4:13 PM No comments: Links to this post