Back home now from an adventurous weekend with one overnight at Adventure Bound in Caratunk, Maine. I had most everything organized but not packed the night before. I was happy when I woke up at 5am to start putting stuff in the bags and the car.

And then all sorts of fresh hell broke loose.

Geoff packed his bag and couldn't find his mess kit. He had taken it with him to Cape Cod on the bike hike in April, and had no idea where it was. I'm not the keeper of his gear, so usually I start hounding him a day or so ahead of time. This time, I kept my mouth shut until the morning of.

Kind of a mistake.

I sent him to his room to look for it, and said "If you can't find it, you'll be eating soup with your hands so get up there and look!" I went out to put stuff in the car, and Jess came downstairs to the kitchen where Doug was standing.

"Geoff just picked up his piggy bank and threw it across the room."

Mind you, this is no small piggy bank -- this was a two feet tall glass pig jar that Doug's grandmother gave us when she moved into assisted living. For years it has sat in the corner of Geoff's room. He puts money in it once in a while, but for the most part it was empty. And now it was shattered into a million pieces in his room.

I went up, assessed the situation, suggested that maybe he get his ass downstairs before I kill him, and that his mess kit was probably in the Troop Trailer.

We got in the car and left. Doug lecturing Geoff a bit, and we went to pick up Geoff's friend Devan and his Dad. Also named Doug, so I'll call him Doug 2 if the need arises.

So there we were, driving north, Geoff is prattling on and on, Devan has on his iPod and is in a world of his own. Geoff is just oblivious that no one is listening to him. As we get up north of Skowhegan, the skies clear up a bit, and we see this huge huge lake on our left. There are tons of little islands in the lake, and Geoff starts talking about moving out there to one of the islands and living there. Devan is now listening as Geoff weaves this tale of "Swedish Fish Island" and how he needs a couple hundred friends to come out with him. Devan thinks a couple hundred people will not be able to live on the island, that is too many, so just bring a couple friends.

The fascinating tale of Swedish Fish Island began to grow, and with each passing island Geoff's desire grew. "I will take a canoe out there, that one. No that one. No, this one is bigger, has more trees. And we'll settle there, and build cabins and have a great time."

With so many islands from which to choose, how does one pick which will be Swedish Fish Island?!

If you are ever driving up Rte 201 North of Skowhegan, look to the left after you go through Moscow and Bingham, and think of which Swedish Fish Island you'd like to live on, and come join us.

We got to our campground and the Scoutmaster and his family were already there. They'd come up the night before and camped at a KOA near Skowhegan (or even in it, not sure) and they were getting the site checked in.

The facility was beautiful. Great big huge welcome lodge with an indoor rock climbing wall and big TV with huge assortment of movies. They also feed everyone (I think it is for an extra fee, not sure) but we were having our own lunch and dinner as some of the boys needed a requirement of cooking at a camp out for rank advancement, so this was a great way to do it. We all had lunch, they had an epic game of soccer, some kids went for a hike, there was basketball and horseshoes, and a pool and a hot tub. The grown ups just sat and relaxed with feet up (or face under ice for the Scoutmaster as he took a shot of a soccer ball directly to the face. Hilarious and horrifying all at once).

After dinner, everything except the tents we were sleeping in was packed into the trailer so little or no work would have to take place. We had decided to eat breakfast in the lodge, at 7am, and so there was no need for all the cooking gear and the portable car tent thing that we have on trips (it is essential... the best thing ever). Everything put away, the boys had a date with the rock climbing wall. Geoff attempted but didn't get far. It's hard to rock climb at his size if you don't have the requisite upper body strength. Some of the kids raced right up the wall, others made it to the top after a lot of struggle. There was cheering and support. It was fantastic.

At about 8:30pm, the sky still beautifully light (thank you Midsummer!) and the boys in the pool and hot tub, the grown ups sat by the bonfire and chatted until 10pm. A few had never met, and this was their first time spending time together. There were stories and laughter, and the boys ran around the fields in their wet bathing suits, with the dusky sky above and mountains surrounding. 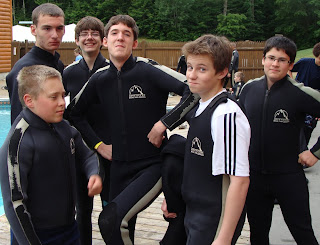 Breakfast in the morning was pretty good, and then we got down to brass tacks. A meeting was held for all the rafters. We had been given the opportunity to go on the actual rafting trip, but I didn't want to blow out my shoulder (and I also have my period so that would be no fun on the trip... six or seven hours without access to a bathroom to do the necessary business sounded awful to me).

The guys then suited up in their wet suits. The outfitters insisted on it because the temperature was below 65 degrees, and the water temp was pretty low... everyone groaned because they didn't want to wear the suits, but the girl running the show was really kind and smiley and said "trust me, you'll thank me later!"

Watching them get into their suits was hysterical. And the faces show how much they loved this. Geoff didn't want to wear the pants, he couldn't get a pair that would go on his body without a struggle and he didn't want to struggle. The girl in charge said he had to wear the jacket and he'd be okay in his swim trunks. "I have blubber power!" he announced, so she laughed. She asked if he was afraid of cold water and he told her how on a camp out he swam in a lake that still had ice on it, he always does the 6 am polar bear swim thing when they camp... so she was assured that he'd be fine.

And then they were off.

Doug and I finished packing up our tent, got ourselves organized, repacked the car, and headed out to a hike. We went to Moxie Falls, which was not too far from where we were camping. A nice short walk, and not too brutal a descent, and gorgeous views. Lovely. A hike out and a visit to another resort area, where the Kennebec Brewing Company has their brewery in the basement, we started to build a fantasy about returning in the winter for a long weekend of snowmobiling. Doug's always wanted to do that, and this place caters to those kinds of shenanigans. 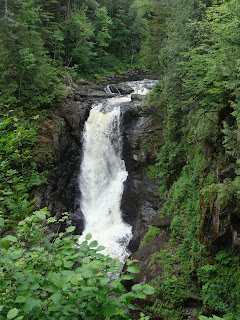 We then missed a turn that Doug wanted to take, and ended up in Bingham where we got sandwiches, and we turned about to go find the turn he missed. Turn discovered, dirt roads encountered, we were heading uphill for some views and hopefully some wildlife.

These are logging roads, designed for huge tree-eating machines. We found a man on an ATV and asked him where the best views were. He told us to follow him, and we went way up, up slopes that we would not have gone up without a guide (thank you Subaru for being awesome). The views were truly spectacular.

The dude and his little girl spent time with us, he told us basically his family's life story of how they ended up living up here and all the beauty and life and experiences they have. He pointed out the landmarks, Pleasant Pond, Big and Little Sugarloaf, other mountains, the Appalachian Trail, and we just soaked it all in. Topped off by a beautiful sight of a golden Eagle flying around, hunting, we just had a beautiful and quiet lunchtime atop a mountain.

Back to the outfitters, the kids had just gotten back. Lunch was supposed to have been served on the river but they cut that out and decided to eat upon return. So the grills were fired up, the food was warming, kids were peeling off their wet suits, tales of amazement were being told.

Turns out Geoff got pitched from his raft on the first set of rapids, known as "Big Mama and her Three Sisters." He said "I ALMOST DIED!" and though he was under water for five seconds and was pulled back into the raft without incident, I am absolutely sure he FELT that way. Doug and I both had said two or three times while we were driving around that he probably had been pitched at least once... Turns out he got pitched in the scariest class 5 section of the trip.

The girl running the show was a merit badge counselor, so she had spent time with him in the raft covering all the stuff he needed to know. After lunch he took a quiz, got an 80 on it, and she was really proud of him, and very excited to sign off on his badge.

Near death experience but you get a merit badge. Nice! 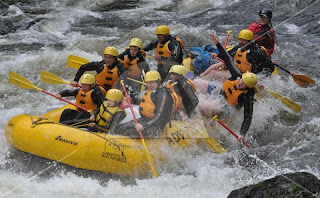 Here is a picture taken by the rafting support crew, right when Geoff got tossed. It is a proof, so it is watermarked, and I'm going to buy the original and replace it (so nobody be mad at me just yet!). And he does NOT find this amusing, at all.

We had an awesome time, and I highly recommend this outfit to people. If you are looking for something to do in New England, something different, something exciting, and something where you're not just sitting around a camp site in the pouring rain with nothing to do, this is the place for you. As I said - the lodge has tons of stuff to do (I found out on the way out the door there is also an arcade and pool table. Dude!) and so if it is just pouring out and you're not on the river, there is stuff to keep people happy.

So that's our adventure. Perhaps next year if we do it again I'll go. My shoulder and the cycles of the body allowing, of course... But even though I didn't raft, I still had an amazingly beautiful time in Far Northern Crazy Beautiful Maine, near Swedish Fish Island.
Posted by Christine G. at 10:48 AM