By the way - I've been trying to take some fun action pictures of Geoff's football team. Here are a couple that I like. 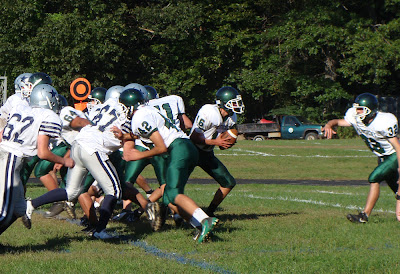 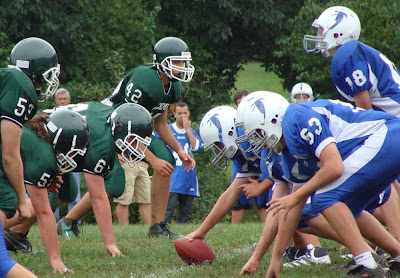 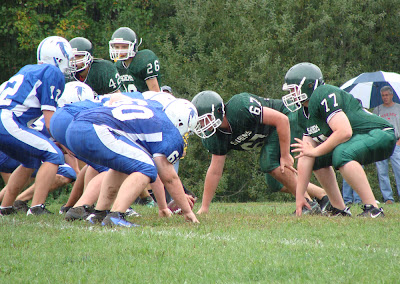 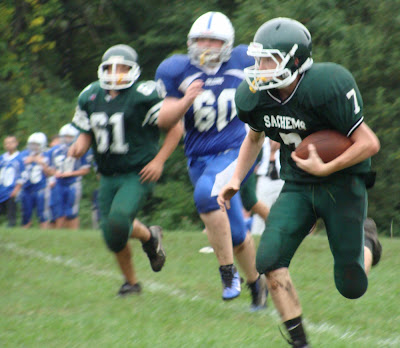 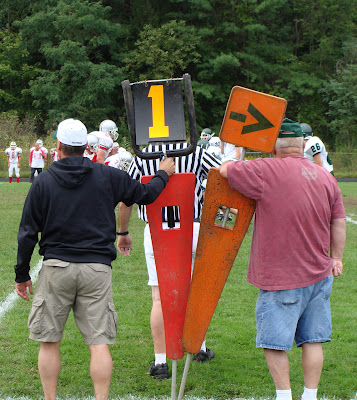 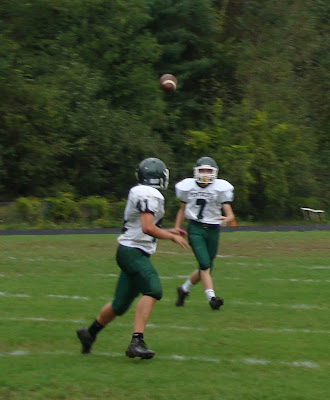 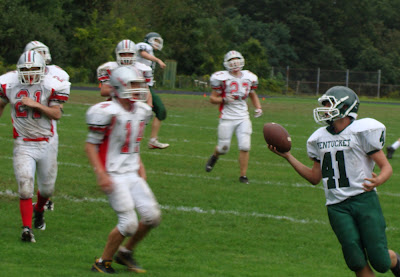 touchdown sachems!!!
Posted by Christine G. at 11:00 PM No comments: Links to this post

be prepared, and beer prepared

I'm watching the Steelers game, hoping they don't self destruct. They're losing, but I have faith they'll pull through. Compared to the Patriots who were winning 21-0 and managed to completely blow it.

Read more »
Posted by Christine G. at 10:47 PM No comments: Links to this post

So I am taking Doug and Dave to the local beerfest today - if you're anywhere near Haverhill, MA the Haverhill Brewery puts on a great event. Two sessions, we'll be at the first.

And it'll be blogged in the Shenanigans blog.

It is a gloomy, gross day so I'm hoping that it is a lot of fun, and there are tents.
Posted by Christine G. at 12:07 PM No comments: Links to this post

I got really good there at posting frequently and then Sept 11th kind of took the wind out of my sails. Sorry to leave you so abandoned. Here is an update.

Tonight I am sitting on the couch with Doug, watching a football game with two teams I don't care about at all but long time friends know I love me some football. So, we watch. Actually, I kind of care because Michael Vick is playing, and I spend great swaths of time pondering his crime and sin, incarceration and redemption (to some) and rekindling of his career. I personally feel that everyone gets a second chance, especially if they are genuinely contrite, and sorry for what they've done. Some people say he isn't sorry. How do they know? They say he is sorry he got caught, sorry he lost all his money and fame, NOT sorry that he tortured dogs and did horrible things to them.

Problem is, culturally... I think he thought what he was doing wasn't wrong and he learned that it is. And I like to think he has taken that cultural difference and has learned from it, and will work to educate others.

I like a good redemption song. And once it hits 10pm we'll switch over to "Breaking Bad."

I didn't get the job that I interviewed for in September. I thought I was a shoe-in, but the HR recruiter told me they're going with someone who has more experience and who has been without work for a shorter period of time. I guess I understand that. Like she maybe has been unemployed for 4 months to my 18... so her brain is better. She's still sharp, has that "I remember what an office is" edge that I'm obviously missing.

I thought there maybe should be a rule that if I'm a good candidate, I get picked first because I've been out of work longer. Then, let the other person be unemployed for a while...

It's only fair, right? 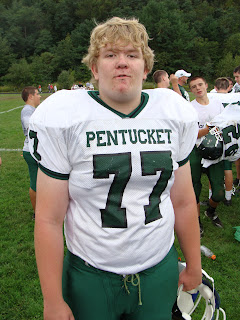 Geoff and football... oh it is fun.

Geoff's team had their first real game canceled because we had the remnants of a tropical storm come through on a Wednesday, and by Thursday the field was so flooded they couldn't have anyone on it.

He was really disappointed, and came home from school. I asked if they had practice instead and he was indignant. "NO! Why would we have practice if the game is canceled!"

Well, it's the kind of thing that athletic departments do. You have an indoor practice or weight room or something. "Didn't you even ask?"

Well, turns out I was right, they did. But the thing is... no one communicates to the kids what they're supposed to do. So they make stupid mistakes like come home. I emailed the athletic director and told him that if Geoff was in trouble for coming home that I was going to rain down hellfire, and he understood. None of the freshmen who left got in trouble.

A couple other stupid things have happened that have me pondering how anyone knows what is going on in this world.

But it all works out, right? And this past Thursday Geoff's team had their first game, and won in an "oppressive" (as Geoff put it) fashion. 24-16. Geoff doesn't get to play a lot, but he likes it, and the guys seem to like him, or at least tolerate him, and it's all good.

He got to play in the JV game last Saturday, and there is a JV game tomorrow, so he gets to suit up and go out there... they do the same with the Varsity too, even though he said that the Varsity guys just say "hey freshman, get me a water" which pisses him off. I told him that's part of paying his dues, being a low man on the totem, and if he gets through to Varsity in three years, he should remember to say "Please." 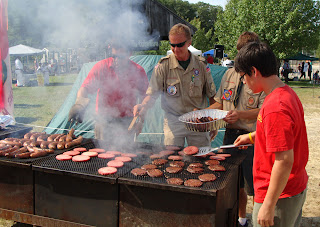 Last Saturday was our town "day" here in little small town land. Every town in this area does a "day" where there are events and activities, food, entertainment and all kinds of things.

Our Boy Scout Troop organizes and runs a burger burn, which is one of our big fund raisers for the year. This year, we far out paced the last three years that I've run this event. Or is it two years? I forget.

Anyway, we had a line 30 people deep at one point, the grill was rocking, the boys were super helpful, and the woman running the cash box kept handing me batches of 20 dollar bills to get them out of her way.

I handed all the money to the assistant Scoutmaster, who at the end of the day pulled me aside and said  "what were our expenses?"

90 bucks for rolls, donated at cost by the local bakery. Burgers, dogs, sausages from the meat market in Haverhill, and cheese, came to about $320. We got free ice and charcoal, but someone went out and bought more charcoal because they felt we didn't have enough. I spent 80 dollars on chips and condiments, so all told under $500 dollars out of pocket from the troop.

Each year around 9/11 I have a hard time sleeping. I start to think about what I would do if I were on one of those flights. How I would respond. Part of my feelings tonight (this morning) center not around 9/11 itself but where I find myself these days with not having a job (got a call today letting me know I didn't get the job I most recently interviewed for), fighting with Bank of America over their complete fucking up of my mortgage, frustrations about so many other things... I don't think of myself as aggressive, naturally. I think of myself as rather mild mannered, always willing to talk things out, negotiate, rationally solve problems. But on nights like tonight, I have different visions. I'll try poetry for a change. See how this fits, or communicates what I'm thinking.

my cell phone would be on
because I would want to have you be on that other end
hearing that I have no fear, that I am brave.

I would tell you I love you first, and listen to you breathe
just for me
for a minute,

and then I'd rise.

I would put the phone down where I once sat
and hope that you would hear.

it is time to do so.

I would not have time to return to my seat before all is
said
and done
and completed.

So I would just have to know that you are aware of what I've done.

I would hope that you'd be proud of me, of my actions
not just this moment but all the moments of my life
during the time you've known me.

You would have the opportunity to tell people ten years on
"She had no fear," and you would not be lying.

But you maybe wouldn't know
that my last act and breath would be full of tears and sorrow
for not being able to touch your cheek again, or hear you
breathe.

Knowing that I'd never have the chance either way,
I'd still fight.
Posted by Christine G. at 1:35 AM No comments: Links to this post

I made chicken soup tonight for dinner. I wanted to clear out space in the freezer, and there was a large bag of chicken stock and 2 chicken breasts up in there hogging up space. I got them all together, I got everything cooking. I added celery, frozen corn (to make more room in the freezer), and wanted some carrots but didn't have any. I found a bag of carrots/broccoli/water chestnuts and pulled all the carrots out of it.

Doug got home from work and got a big huge bowl of soup, and plopped down on the couch.... promptly spilling his bowl of soup in his lap.

He ran into the bathroom shower downstairs and Geoff came down, and started laughing.

I told him that he was NOT allowed to laugh that it was NOT funny. I asked him to get a towel while I supervised the dogs in cleaning up all the soup on the floor (and couch).

With towel in hand, I went to the bathroom to check on Doug, and he was in the shower holding the detatchable shower head on his nads.

He came out and started drying himself off. And he laughed a little, and I told him he wasn't allowed to laugh. He still had his socks on.

After he was dried off and dressed again, he didn't get a second bowl of soup. He got crackers and cheese, and wine. "So you're mad at my soup?"

"It was doing the only thing it knows how to do," I said sadly, echoing a story from his childhood where his dad stomped on a whistle that he wouldn't stop blowing...

"Burning my balls is the only thing it knows how to do?"

"No, being HOT is the only thing it knows how to do."
Posted by Christine G. at 7:33 PM No comments: Links to this post

I just ate a peach.

Not just any peach, but the last of the peaches that Doug brought back with him from Ohio. He had purchased a nice, full, overflowing bag of them from an Amish farm near Salem when he went to see his grandmother the day after he dropped Jess off at college last week.

We made short work of the bag, enjoying one or two a day each and basking in the glory of the flavor and texture of these gems. A napkin or paper towel was mandatory while eating them lest peach juice flow down the hand and arm.

On Thursday, I placed the last peach into the refrigerator, fully believing that Geoff would eat it after football practice. He didn't. He said he doesn't like them cold, and didn't want to wait for it to warm up. So it sat there until just now when I decided that if I didn't take it, it may go bad sitting in there by itself.

It was freezing cold, juicy beyond imagination. Napkin at hand I finished it off, the ripe flesh falling away from the stone core.

Now I am sad because grocery store peaches are sad, horrible rocks in comparison to these beauties, and I refuse to buy them. I want another giant bag of peaches straight from the Amish farm in Ohio.

And I have this sense that summer is over.
Posted by Christine G. at 3:44 PM 1 comment: Links to this post