I got my blood work back. Much better news than I thought.


"Your diabetes control has significantly improved with your weight loss and healthy lifestyle habits! Your A1C is now 6.1% which is EXCELLENT!"

My cholesterol is still high, at 215. the bad LDL cholesterol is 125 and should be under 100. the good cholesterol was awesome at 55, so the average/combined reading works out math wise works out to "average" and it was a happy result. my glucose was 139 so that was still too high so I need to fix that. So, when I walk daily, my glucose lowers. so when i get out and walk it helps.

And I have to get back to walking. often. and that 139 will get lower. aah.

Also, I have not gotten to my weight loss target weight, but overall have lost close to 30 pounds. I am 2 pounds away from that. Two Freaking Pounds, yo. I'm not going too hard on myself, because that's pointless and counter productive. I did my diet for 100 days and  Carrie and I decided to restart the count so I'm on day 9 now. or day 109. depending on how you look at it. I am chronicling my food intake, I just need to get back to walking as much as I did while I was at the contract web design job. I have barely walked at all while back at "awesome."

She said come back in September for a retest. I hope to be in that 5 range where Doug has managed to get himself.

I miss beer, but it isn't worth having to take medication to enjoy. Sad but true.

What I have been up to, or why I love my job

Week 3 of summer camp at the cooking school is over, with probably some of the most interesting stories to date. Some of them I will not share here, lest people come across them and see themselves, or feel that I'm being ... exaggeraty.

Let me just say this: Folks... when somebody asks you "Are there any foods you do not eat due to dietary restrictions, such as pork, or due to allergies, like maybe peanuts?" Answer the question. Don't call the next day and say "Um, I should have taken you seriously when you asked me that... because my daughter came home with pork chops. And we don't eat pork..."

Also, News Flash: A cooking series focusing on Italian cooking from many different regions will have pork in it. Believe it or not, Italians eat more than Pasta.

Know where your food comes from....

Yesterday Doug and I spent the day at the home of a friend of a friend ... killing chickens.

Every year they do 20 chickens in the spring, and then whatever is left over from the group the last weekend in June. Doug participated in the spring kill, and the chickens were all about 2 pounds max. They get them go to this point and they become roasters and fryers, 8-12 pounds max.

It's amazing how much they can grow in a short period of time. 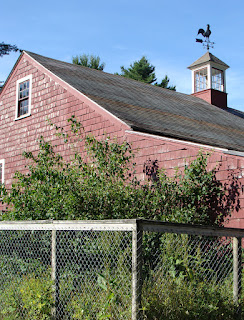 These folks have been doing this for two decades. We know a family through Boy Scouts who introduced us to these folks.

Last year Doug indicated to his friend that he wanted to work on learning something useful, in case there is an EMP, a zombie apocalypse, some sort of catastrophe.

Knowing how to do this and do it correctly is important.  Also, we both feel that it is important to be part of the process of bringing food to the table. We "farm" at home with tomatoes and other veg. Learning how to bring meat to the table is an important thing. I think both Anthony Bourdain and Andrew Zimmern have expressed that Americans need to be more in touch with that process, that bringing food to the table process, and everyone should do this at least once.

If I am being too judgmental here, please lecture me. Let me know I'm off base. I'm open to your thoughts. But I honestly have to write this entry and get this off of my chest.

Last week we headed out to Western Pennsylvania. My niece is on a softball team and they had two playoff games. Well, the first playoff game would have given them a day off from the second one, if they won it.

It was a hard game. The other team was mostly bigger girls, older girls, and they were skilled. Hardcore. Tough. So they lost.

During the game there were two moms on the other side of the field who were dressed ridiculously, in hot pink, the team color, and they were screaming loudly... not really routing for the girls but ... screaming. They also were smoking right on the fence, which in and of itself made me rather angry because for chrissake "ladies," do you need to smoke RIGHT at the teams, your team and the other team? Take it 50 feet away, wouldya? 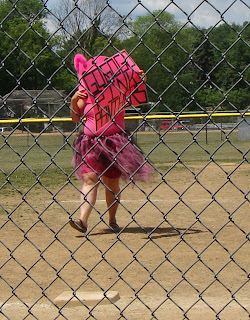 Anyway, the other team won game one, and after the girls shook hands at home plate, one of the moms took to the field with a sign and a mask on her face, and rounded the bases, shaking her ass at each base.

I took a picture of her moving from second base to third. My sister in law thinks she gave me the finger at one point.

The girls on my niece's team stood and watched her incredulously. And I felt horrible for them. And then I felt really horrible for whoever this woman's daughter is. It isn't enough that her team won. No. She has to make it about her, and her shenanigans. And I was deeply disturbed that someone would go to this length.

Just let the moment belong to your kid. It's her win. Not your opportunity to taunt a bunch of 9-13 year olds with your pink and black tutu. Stop it. 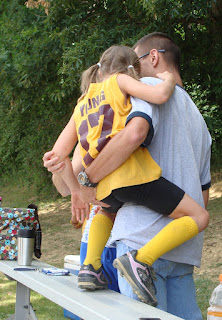 In the meantime, the little girl on my niece's team who was up last and struck out felt like she lost the game.

And I watched her daddy and her mom comfort her. And I was so touched by the love and support that I snuck this picture of the moment. I normally wouldn't take a picture of someone in grief like this, but ... I had to balance out the visuals.

Where is the better parenting here? I think you know.

I pondered these things for the better part of the day. Geoff and I talked about it, he was disappointed that his cousin's team lost, and he said that the woman who booty-shook the bases in her victory lap was "on crack." I promised him that I love him, I will cheer for him, appropriately, and I would never in a million years embarrass him. I asked if that woman's behavior was embarrassing to her daughter and he said absolutely. And he knew I would never do that because I'm not "on crack."  Then I asked him if I did embarrass him when I'm at games and I'm cheering and taking pictures and he said no. I asked if he'd tell me if I ever did, and he said he would.

In the meantime, I'm exceptionally proud of my niece and her team. They had to play a second game after losing, and they won that one keeping their playoff hopes alive.

And none of the parents on the other team taunted or wore tutus. Thank God.

Here's a picture or two of the lovely niecey bringing the heat. 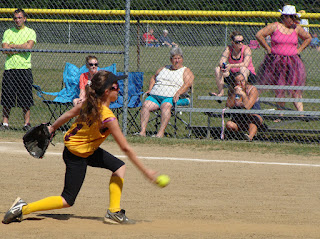 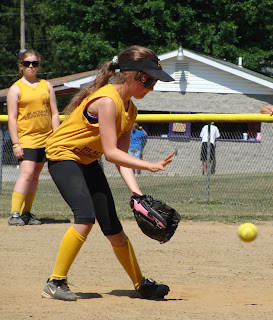 The rest of our trip was great. We went to Ohio, we went to the Rogers Sale. We got license plates. We saw Doug's grandma and it made her day. We went on the cemetery tour of eastern Ohio to see the graves of Doug's father's family. And we had a wonderful campfire poolside at my sister in law's house.

It was a very good trip. Pictures are in Flickr. Enjoy.