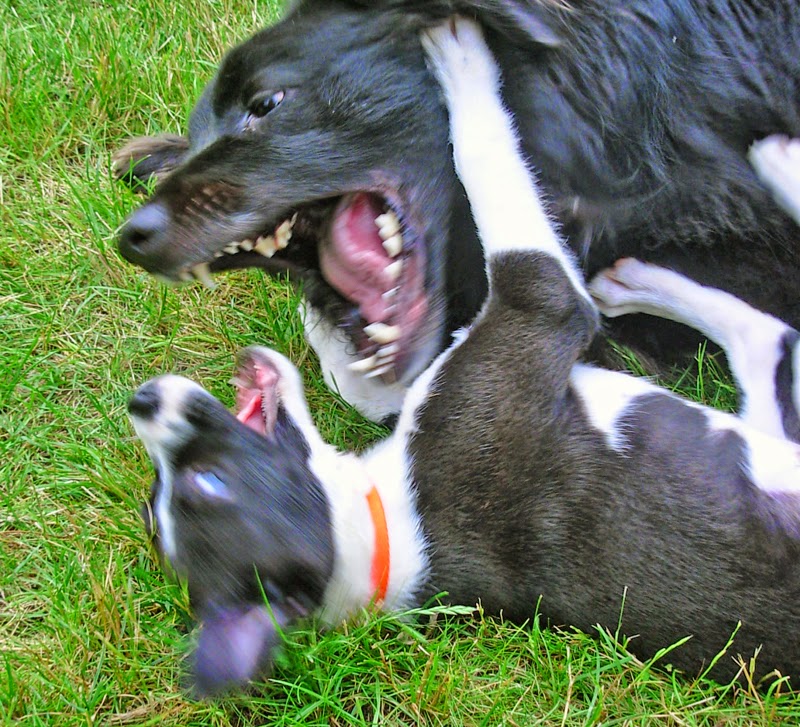 Back in 2006, when we first got Brodie, she and Jack would "Face Fight," which is a dog thing where it looks like they are actively trying to kill one another by eating their faces, but really, it is doggie play.

She was so small when we got her, that she would stick her head INSIDE his mouth, all the way. All the way inside his mouth. Like a lion tamer with a lion. And Jack would stand there and look at me like "well, what am I supposed to do with this aside from just .... wait?"

Face fights were a frequent occurrence in our house.  And it was a lot of fun to watch.  I have dozens of pictures of the two of them doing their daily shenanigans. They played so hard with one another. They would run through the house and tackle each other. He was already full grown, at about 70 pounds and she was getting bigger by the minute, and the ruckus. Oh the Ruckus!

Gonzo came on the scene shortly afterwards, and he and Brodie never really got along great... when Jack and Brodie would do their "sibling" bonding,  with the biting and the growling, and the running and chasing, and jumping on the couch and off the couch and into the back yard, and AIR HUMPING! And the biting biting biting! ... poor Gonzo would stand there and BARK at them and look at us as if to say "Will you please stop the children from behaving in such a manner!"

It was intolerable at times to listen to him barking while they played and did their thing, so we would break it up just for peace and quiet.

The past couple of days, Brodie and Jack have returned to their face fighting ways. Jack is far older, not as willing to participate as the little girl is, but they go at it and it is amazingly funny.

Jack also attempts to "dominate" her once again by humping her general vicinity. The air, her side, near the couch... it is like he needs to remind her that with Gonzo gone, HE is the Alpha, and she is still, no matter what, the sub-Omega.

Brodie has taken to washing his face every day, which she used to do to Gonzo. They never got along great but she did a great job of doing some nice subservient things for him. Now she does them for Jack. This morning it was very sweet watching her wash his face, both of their tails wagging...

And no one barking at them to knock it off.

I'm not saying I'm happy Gonzo is gone. By no means. I'm just noticing the dynamic.