The law of the pack, the oath of the Scout...

When Geoff was little we didn't really have a diagnosis for him for his behavior issues at the time.

Part of me said "he's just a super active boy, it's normal" and another part of me said "wow, this kid is unlike any other little kid I have ever known."

At the time, we decided to keep him in a private pre-school for kindergarten (full day) instead of enrolling him in the public school kindergarten. Many factors worked in on that decision, such as   day length, class size, amount of teachers and everything. I knew he'd do better with the private K that he was in, and dreaded sending him to first grade. I would have kept him at the private school if they had a K-3 program. 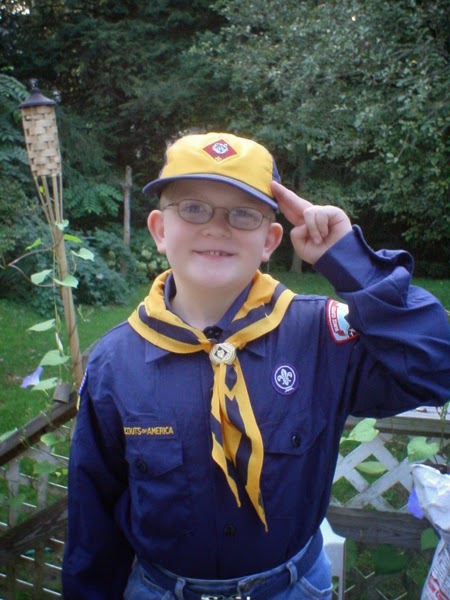 In first grade, we signed Geoff up for Cub Scouts as an activity. We tried the town soccer program but that didn't work at all for him. I thought running in a giant pack of kids would be what he'd like, but when the coach told him to "dribble the ball" down the field he stood over it and spit and drooled on it... because that was what his knowledge of "dribble" meant.

Cub Scouts was challenging. Small group format, 6 boys total in 2 dens, 2 den mothers per den, and I always stayed with Geoff's den to help. Because I had "that kid" who always needed the extra help and external conscience and guidance.

One day while going to his Webelos meeting he decided he wasn't going to wear his uniform to the meeting.  Uniforms were only for the special occasions like Pack meetings. They had never worn their uniforms to den meetings but his den mother was trying to get them used to the idea of always wearing their "Class A" uniforms to get them ready for Boy Scouts the following March. Geoff and I had a huge fight about it, and I asked him if he would just rather quit Boy Scouts and be done with it.

He told me yes. Then as I turned the car around to head back to the house he said "No, I'll wear my uniform." So we went to the meeting, and he stayed in Scouting.

Doug says he recalls Geoff telling him shortly after he joined the BSA Troop that he was going to be an Eagle Scout. Doug found that slightly entertaining at the time. I was just happy that he wanted to continue to be a Scout at all.

Boy Scouts was a lot different than what he'd been experiencing with Cub Scouts. It was a big Troop, and all the boys were together, of all ages, 10 to 17, and Geoff and his fellow incoming Scouts were like a big pack of puppies, a herd of kittens, that older Scouts had to wrangle and convince to do things and listen and participate. It looked frustrating to me as a mom to watch the older boys trying to work with Geoff's patrol.

Both dedicated themselves to finishing up as Eagles. 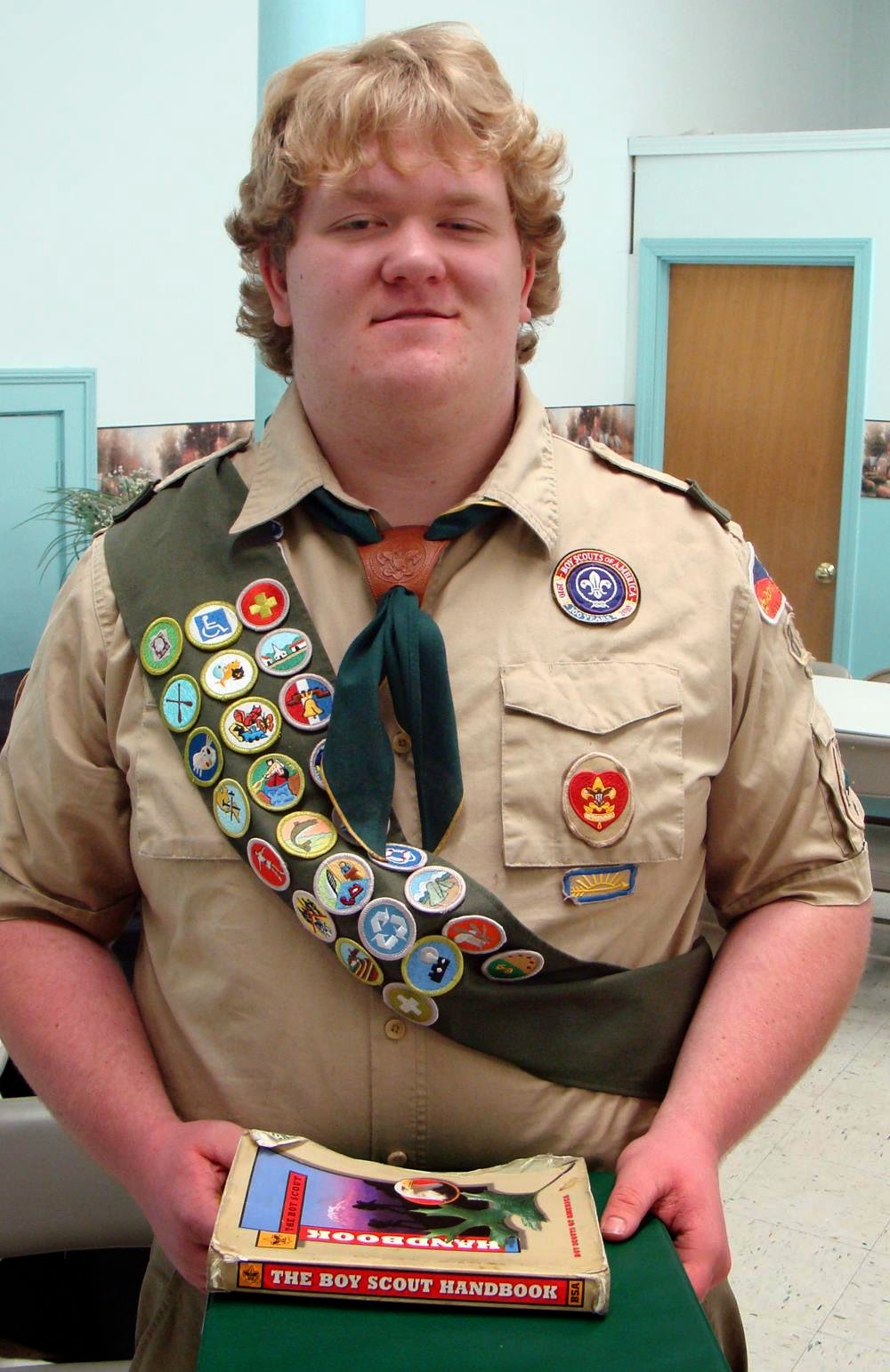 On January 15th, Geoff passed his Eagle board of review. He and his Scoutmaster went into a parlor room at a local church to go over Geoff's project. Paperwork, pictures, examples of the posters and flyers. They asked him questions about leadership and his role in Scouting. They released Geoff and his Scoutmaster to come out and wait with us... and called us back in to congratulate him. Congratulations, son. You're an Eagle.

You all have followed the past couple of months where I have outlined the project, I've stressed over him getting things done. I've supported, shoved and cajoled.

We managed to get a couple small smiles out of him for pictures but the smile on his face when they congratulated him is etched in my mind forever. A great big huge grin, ear to ear, all teeth. Pure and happy.

We didn't doubt he'd be able to do it. We didn't think for a minute they'd decline him. It was just super stressful getting him to this point and through it all.

Last weekend, I wondered "What are we going to do with our time now that this is done...?"  I guess now we plan that Eagle Court of Honor ceremony.

When Geoff was a Cub Scout he learned the Cub Scout oath (also known as the promise) and law.  Those are:

Oath
I promise to do my best
To do my duty to God and my country,
To help other people, and  to obey the Law of the Pack.

Who is Akela? It comes from the Jungle Book of all places. Akela is a leader to the Cub. A Cubmaster, Den mother or father, other adult leader, and the Cub's parents. A symbol of leadership, wisdom, comfort, protection. The pack of children are guided and guarded by the Akela... and I think I made a good Akela through all of this process. And continuing into Boy Scouts, I think that I did a decent job continuing to be an Akela... for me, watching Geoff through this whole process I don't see the Eagle Scout at the end.

I see the Wolf Cub at the beginning. And I always will.

My dogs are 13 and 8. Jack is bowed of back and slow. Brodie can be fast, but knows where her body ends and yours begins.

Our neighbors have a 9 month old chocolate lab. He's huge. His name is Rocky. He barks all day when they are not home, which makes me sad, that he hasn't figured out that it is okay to be alone. And he is hyper. Super hyper.

Yesterday when Geoff and I got home from a Boy Scout event, Rocky came running around the car to meet us. I couldn't hear his owners calling for him, and they weren't running behind so I was slightly confused. Rocky ran in circles as Geoff and I tried to grab him.

And he crashed into me full force, whole hog, freight-train speed of big brown dog in white snow and ice. The fact that I didn't go flying and land on my face is a sheer miracle, a defiance of any law of physics that can have been applied to the situation. He hyper extended my knee slightly, but not so bad that it was the end of the world. It was a pain for a bit last night but I am fine.

I tried to get ahold of his collar but he was like a hurricane. And as quickly as he appeared, he left. He ran around the back side of the house and didn't return. So my guess is Josh or Maureen were out there and he went with them, wherever with them was supposed to be.

We aren't sure how much longer Jack will be with us. He gave us a big scare about a month ago and we thought we would be putting him down. I was surprised he made it into the new year. Brodie probably has a good five years ahead of her if she has a day.

And I'm honestly not in any hurry to get another big huge dog that will knock me on my ass (or try to) anytime soon.
Posted by Christine G. at 6:09 PM 3 comments: Links to this post

There are certain joys

Getting home semi-early tonight, we opted to make left over ham sammitches and doug suggested home made french fries. Which got Geoff super excited, and made me inwardly groan.

I had G do all the prep on the potatoes, and then I put the first layer into the frying pan. He watched me do it, and watched me turn each of the slices over and check the coloring. After the first batch was done he said "Go sit with your husband, I got this set."

So. I'm sitting with my husband. He's got this set.
Posted by Christine G. at 6:48 PM 3 comments: Links to this post


This past year wasn't the suck that 2013 was, that's for sure, but it still wasn't awesome. It started out rocky with me ending up in the hospital at the end of January. Let's hope nothing stupid like that happens again. I got placed in a good job with good people and while I've felt a little awkward with some of the folks and I've kind of felt left out and on the periphery (various reasons I'm sure) I actually really like where I am. My health hasn't deteriorated any further, I'm thankful for a lot. In March I couldn't walk up a flight of stairs and now it's no big deal, and walking any sort of long flat distance is a piece of cake. I need to get back to more walking though, and get my legs stronger than where they were this time last year. My knees hurt, my left hip hurts. but all told ... I can make this better and find my strength (to steal a little bit from a certain rehab hospital in the area)

There were the huge highlights like Aaron's great wedding, our first vacation really since 2005, and our first trip to the west coast since 1988. We saw some beautiful things and places, I got to be a Best Man, and gave a toast that I think many people will remember forever including referencing my daughter in diapers and Zeubenelgenubi and Zeubeneschalami, words that most of the people in the audience probably had never heard.

And then there is the whole Geoff Journey with the Eagle Project. Watching the work he's put in all year has been outstanding.

One of our dogs died, and another is kind of on the edge of not making it for much longer. And then there's ole Brodie girl who actually will be 9 this March if you can believe that. Officially a Senior Dog this year, she still is like a puppy sometimes.

Once Jack goes, she'll be by herself and I'm not sure I want to get another puppy any time soon.

Our lease runs out in August and Doug thinks we should move closer to the city. Geoff will hopefully have a job, and if it is around here I don't want to move too far. Jess got picked up for a contract job that I used to have and she's doing great with it and is very happy. I'm hoping that she'll be able to whack all of her student loans down and figure out what comes next for her. As long as she's happy, I really am happy.

If you've been reading since 2001, or if you just happened to stop here along the way... thanks for coming along on this ride with me through the years.