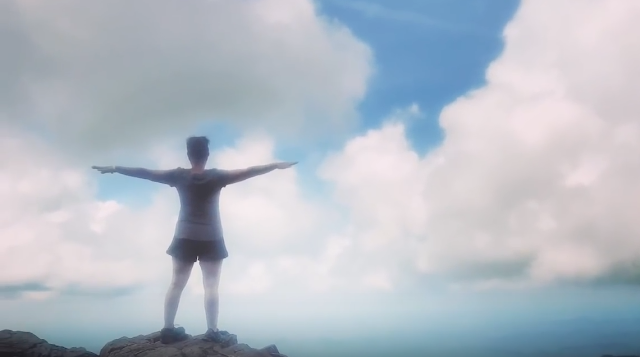 I have a friend who set out to hike the Appalachian Trail by herself. She trained through the winter, prepared by hiking around her home in Tennessee and working with experienced veterans of the AT to get ready. I feel that's pretty badass, and a younger me once wanted to do this, when we were campers and hikers and I was in a shape other than round.

She set out in March, and has a Facebook page and Youtube page where she posts videos that she has been making as she goes.  I've been following her steps from afar.

Early in the journey, she injured her foot and has a hairline fracture which is making hiking exceptionally painful, as you may reckon. She saw a couple of specialists, had her shoes checked out for anything that could be done footwear-wise to make this less difficult. She took a couple weeks off the trail in very southern VA about 3 hours from me and rested up, doctor's orders.

Last week she got back on the trail with high hopes. Knowing she is so close, relatively, and wanting nothing more than to go hug her and buy her a great dinner, this has been exciting for me. I've been eyeballing Harper's Ferry, WV, as a destination where we can connect. I know I'll cry when I see her.

Because she lost a good chunk of time, she revised her north-south plans a little, and was hoping to get a ride up to Western Massachusetts to hike up to Maine from there, instead of trying to do it all straight up to Maine. In September and October, conditions change up through that end of the journey and it can be unpleasant and they eventually close the trail to hiking up that way.

I was encouraging her to make it to the halfway point to Carlisle PA, because there's nothing better than yelling "We're Halfway There!" when you're on a journey. My kids still do it, and funnily enough, even when we are less than halfway or more than halfway. It's a thing with us.

Hikers call this "flipping" on the trail, and there's no harm, no foul. doing things where you get a ride north to hike back south to where you left off, whether in short spurts of several states at a time, it doesn't matter. You are stepping every mile of the trail, so who cares if it is not in order. I thought it was a good plan, especially if worried about the weather. Heck, in my brain starting the trail in the North in May and hiking south all the way until you get there, you still have to struggle through the heat of July and August but at least you may not have to worry too much about snow maybe when you make it to Tennessee and North Carolina. You may get a little extra time before the Smokey Mountains are blessed with winter.

I'd been trying to figure out a way to assist her in getting to Massachusetts. I can't take her - we have no plans to head up that way now, but maybe in a couple months. I asked a few friends who live down this way who drive up that way and they were in similar positions. Not traveling until late August. Waiting until Columbus Day.

She has told me that "The Trail Provides" is a philosophy that everyone has while doing this. People are willing to drive hikers north and south, into town. Entire towns have festivals for the hikers, called Trail Days. So she is looking to connect with someone possibly who can help get her north that way.

She messaged me today saying that she may not be able to do this at all any more. She wants to stop. She is about an hour and a half from me and I think I may go rescue her. She wants to go home to Nashville, and stop.

I'm torn about what to say to her. Encourage her to continue, believe in her ability to do this. Or congratulate her on this and get her and a bottle of wine and help her figure out a way home knowing she has accomplished so very much.

It's not my journey but she is my friend. I know what she wants, and she wants to complete the journey and not fail at it, but also she wants to heal her foot and go home. How do you help someone decide what to do?

We'll see what happens, but if nothing else, if she stops here I'm more than willing next year to help her pick up and start from the very same spot and go on with a healed foot.

I've enjoyed following her steps, her tears, her laughter, and each of the white trail blazes she has shared.

If you want to follow the journey so far, visit her videos at Act Old Later on youtube. She'll take you along for a walk. Several times her little screen captions have been just perfect for me. Watching at the office with a message that says to just stop what you're doing and listen, or look at these little purple flowers, or see how the clouds walk across the mountains from here... these videos have been a kind gift from her. Whether they continue after this weekend or not, so far the journey has been interesting.

One of the things I've been pondering on this experience is how alone she is. That may be what is breaking her heart and making her want to quit more than the foot issues. Once in a while she gets to overlap with other hikers, but for those who hike as a team or as couples, they get that moral support and that encouragement that you sometimes need to push through. And here she is alone as alone can be.

I'm sure I would enjoy the solitude at first in hiking alone but after a while, no.

Send her good thoughts to make the right decision for her.