Late August and the Civil War Defenses of DC

It is a Sunday morning, and I have to say that it has been 11 months since we've been to church. Doug was itching to pick a church for us, but then dropped it. Everything was too conservative or way too liberal. There was nothing that spoke to us and made us feel like it was home. I miss the congregation of the church back home. Ha. Look I still call it home.

Sunday mornings we fellowship together. After all, I have said it before, if you can't find God in the sacred space of your backyard or your front porch, you sure won't find God in a building that people claim is sacred. Coffee, news reading, game playing on the phones, dog watching the other dogs going down the street, and the ever adorable watching of people running the stop sign on our corner keep us entertained.

When coffee time fellowship is over, usually right around now, we get ready to do errands and go places and look at things. About a month ago, Doug suggested that he wanted to start visiting the Civil War forts and defensives all through the DC. Sounds cool and historic. Let's go!

We started just across the border from Silver Spring in DC at Fort Stevens which was restored but sits in the middle of a neighborhood in the beating hot open sun.

Walking around the earthworks and modern materials walls of concrete imitating wood, we recounted the story told of Lincoln being there during the Battle of Fort Stevens in July 1864 when he was nearly shot in the head.

I guess if you're supposed to die by being shot in the head, eventually it gets you. Hmm.

Next, he wanted to walk to the small national cemetery  where the dead from this battle were buried. It was brutally hot, so we got halfway up there (it is probably a half mile north) and we weren't seeing any signs or sights of it so we turned around and went back to the car, and drove.

Again. I cannot stress how much I hate how hot it is here.

The cemetery was small, well documented. The visitor's center was closed, which if you ask me is a crime on a Saturday when tourists might want to visit? Not sure if that's just part and parcel of budget cuts but I'd close on Monday and be open Saturday. We weren't the only people there to see the place.

It is a very small cemetery but a very important piece of the history of the District and the Civil War.

We drove over to Fort Slocum, which is now a large open field with a small pavilion. A family was there setting up folding chairs, the grill was starting up, and music was playing. It looked to be a nice afternoon where you could get shade, and I was happy to see the spot being used for life affirming activities.

Next we tried to go to Mr. Lincoln's Cottage. After driving around and getting totally lost in the North Capitol Street area, we knew we were close but we were not sure we were in the right place. Upon reading articles like this delightful one in the Washington Post, I think we were spot on and this was just part of the deal. A guarded gate, a military feel, and the cottage was probably just beyond our reach. We bailed and drove around another section of the cemetery that was not so closely guarded, and it was a mini-Arlington National Cemetery with perfectly measured white tombstones filling every corner of the grounds.

We opted to go home at that point. It was just too bloody hot to make any more effort to try and see something else. We were close to Fort Totten but want to save that for a day when I can walk without dying. Again. So hot. So very hot.

Yesterday was a gorgeous day. Humidity was gone, it was in the mid 80s which felt like winter compared to the weeks prior. We were up for another attempt at Civil War defenses touring!

First stop was in  Rock Creek Park, which a US National Parks Service property running through the center of DC. It hosts miles of trails, an equestrian center, planetarium, public golf course. There is a lot to explore there.

We parked at the planetarium and visitors center and walked north past St. John High School to go up to Fort DeRussy, (see map) which has not been restored to its original or close to its original condition. It is overgrown and wild. It made me think of the Talking Heads' song "(Nothing but) Flowers" as trees and brush and plants all grew up over what used to be the walls and parapets and  defenses.

After DeRussy, we headed west to Fort Reno. It is the highest point in Washington DC, 409 feet above sea level, and Doug read that the views were great. 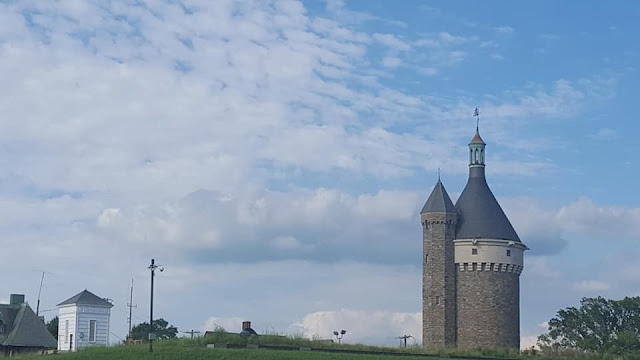 Unfortunately, it seems the property belongs to the DC water authority and there is a reservoir there, and the entire area is fenced off with chain link and barbed wire.

One cool fact is there have been many concerts in this park, and there is an information sign about Fugazi playing there in 2002. That's badass.

It struck me as the kind of park I might have picked for a Rebel Shakespeare show back in the day when I was booking tours for the teen program. There is a high school across the street, the field is wide open and beautiful, there is a stage there, and the backdrop of the tower would make an impressive sight. It made me sense possibility instead of feel like we were ripped off by not being able to get to the tower after all.

We drove home through Tenlytown, which looks like a lot of fun, and a lot more affordable for food and shopping than its neighbor to the north of Chevy Chase.
Posted by Christine G. at 11:49 AM No comments: Links to this post